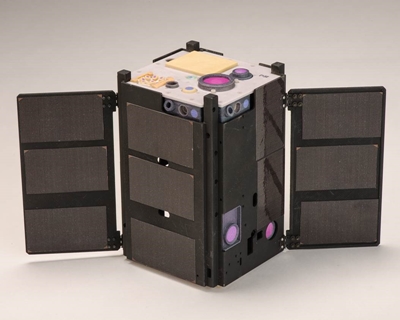 The US division of UK-headquartered Surrey Satellite Technology (SST) is to build new ultra-compact, low-cost and low-power laser terminals to provide secure data downlinks from space to Earth.

Under a development partnership signed with US-based BridgeSat, SST says that it will equip the tiny flight laser terminals with a standardized interface and a “smart” module to achieve the required pointing accuracy to hit compact ground station receivers.

The terminals will become key elements of BridgeSat’s planned free-space optical communication system, which will provide much faster downlink speeds than is possible with today’s radio-frequency connections.

Game-changing downlink
Clare Martin, VP of programs at SST, said in a company announcement: “With this partnership, we have a unique opportunity to bring a more accessible, faster optical solution to the smallsat [sic] market at a lower cost.

“With each unit at a mass of 1.5 kilogram or less and power under 25 watts, we see this solution as a game-changer for eliminating data downlink constraints for the commercial satellite community.”

SST and BridgeSat are not the first to envisage free-space optics as the natural successor to traditional RF data links between space and Earth. Earlier this year the European Space Agency (ESA) launched the first dedicated laser terminal for the future European Data Relay System (EDRS) “SpaceDataHighway”, which will help to transfer huge datasets from high-definition imaging satellites back to Earth at much faster speeds than is possible with RF links.

However, the SST and BridgeSat technology will be much smaller than ESA’s and, unlike the EDRS network, will include a direct optical downlink to Earth – meaning that the laser will also have to negotiate the distorting effects of the atmosphere.

The two companies say that they expect the optical communications system to be operational within just two years, with BridgeSat co-chief John Serafini claiming boldly: “Our system’s expansive data downlink capacity will potentially enable the space industry to grow exponentially.”

Key partners
Boston-based BridgeSat was set up just over a year ago, by its London-listed investor Allied Minds. The company is said to have co-invented the optical downlink technology with The Aerospace Corporation, which carries out federally funded research for the US Air Force.

Serafini and colleagues believe that demand for accurate and frequent data collection from low-Earth-orbit (LEO) satellites will accelerate quickly over the next few years, while the cost of building and launching satellites will fall as payload sizes continue to shrink.

Other key partners include the Draper Laboratory, which is providing expertise in space systems technologies, optics and secure digital data links, and the Massachusetts Institute of Technology (MIT).

MIT aeronautics and astronautics specialist Kerri Cahoy is an advisor to BridgeSat, and said at the company’s founding: “We are innovating to improve and miniaturize spacecraft-pointing capabilities, an important enabler for higher-rate narrow beam optical systems, improved transmitter efficiency and the development of low-cost, easily deployed, and effective ground systems.”

NASA OCSD mission
The laser communication terminal under development at BridgeSat is derived from a design for NASA’s optical communications and sensor development (OCSD) mission, launched last October with the intention of sending laser data to a ground station featuring a 12-inch Cassegrain telescope on Mount Wilson in California.

Shortly after the launch NASA said that the tiny CubeSat built by The Aerospace Corporation had suffered a problem with its attitude control system – critical for the laser downlink pointing - and was initially only able to communicate with the ground by radio.

BridgeSat is aiming to commercialize that initial OCSD design, which weighs less than a kilogram, consumes just 20 W and measures just 10 x 10 x 3 cm but has the necessary pointing precision and stability to connect with small ground station receivers.

Last month BridgeSat said it had hired Joseph Campagna, previously a senior manager at Orbital ATK, Motorola-Iridium, and a US Air Force veteran, to lead the development of its optical ground-station network.