Aerospace factory based on additive manufacturing lifts off

To be based at Munich's Ludwig Bölkow Campus, pilot plant focused on 3D-printed parts for space apps. 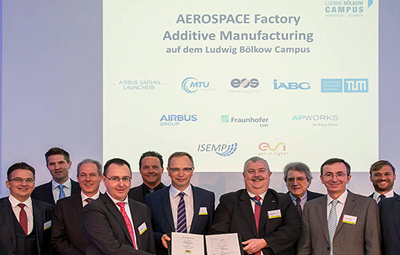 Research and industry groups have committed to AM development centre.

Aerospace company Airbus Safran Launchers is leading a significant group of industrial and development partners, who have signed a declaration of intent to develop an international research and application center for additive manufacturing processes focused on aerospace propulsion systems.

The Aerospace Factory’s management committee will consist of one representative from each partner and will be chaired by Airbus Safran Launchers.The R&D center’s hub will be at Munich’s MTU Aero Engines; EOS; Airbus Group Innovations; the Technical University of Munich with its Institute for Machine Tools and Industrial Management (iwb); the Fraunhofer Development Center for X-ray Technology (EZRT); Airbus subsidiary APWorks; IABG; the Airbus Endowed Chair for Integrative Simulation and Engineering of Materials and Processes (ISEMP) of the University of Bremen; and ESI Group.

Based on the LBC’s three-pillar model, the Aerospace Factory Additive Manufacturing will run research and development projects, work to train and safeguard the next generation of skilled workers, and have Airbus subsidiary APWorks as a founding partner from the start. The Bavarian region’s aerospace innovation system is expected to profit from what the group calls a "further excellent scientific and industrial partnership".

The the cooperation partners added that they have not only agreed to work on a research project, but will also be teaming up in a project center with a “large-investment pilot factory” on the LBC, which will also lead to further investment in research and development. 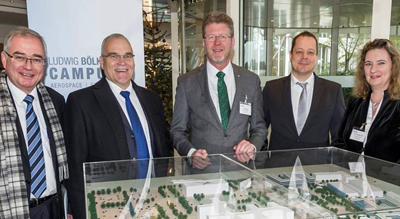 The partners will cooperate along the entire value chain of component design, powder production, the AM process including process simulation and post-processing, along with quality control of process and components. The focus of the research on campus will be on the development of tailor-made materials for the 3D printing process. This will result in a holistic approach in industrial 3D printing for mission-critical propulsion components in the aerospace field.

The Aerospace Factory is financed partly by the partners themselves and partly via national and international research and development contracts, such as from the DLR (German) Space Administration and the European Space Agency.Jérôme Breteau, who manages the Future Launchers Preparatory Programme at ESA, acknowledged “the enormous potential of 3D printing for ESA programmes” and said, “The Aerospace Factory Additive Manufacturing will unlock the untapped potential of the additive manufacturing process for future propulsion components in the space industry.”

The so-called ‘KonRAT’ (Rocket Propulsion Engine Components for Applications in Aerospace Transport Systems) project at the LBC, sponsored by the Bavarian Ministry of Economic Affairs and Media, Energy and Technology, can already be considered an Aerospace Factory program. As part of this project, the Bavarian State Ministry of Education, Science and the Arts supports the Technical University of Munich with acquiring the necessary large-scale scientific equipment at the Ludwig Bölkow Campus. 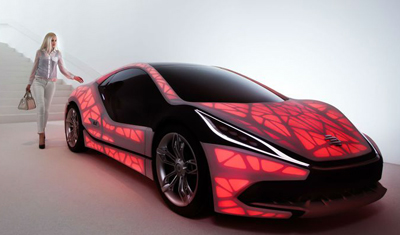 The futuristic-looking car shape – produced by so-called hybrid manufacturing – showcases a new way in which a bodywork concept that is adaptable and can be manufactured flexibly can be delivered in order to make the increasing range of different vehicles manageable thanks to the large number of different drives and load stages, say the partners.

Additively manufactured bodywork nodes and intelligently processed profiles are combined. Thanks to additive manufacturing, the nodes can be configured to be highly flexible and multifunctional so that, for example, different versions of a vehicle can be produced on demand without any additional tooling, equipment and start-up costs. Steel profiles are used as connecting elements. These too can easily be adapted on an individual basis to the specified load levels by providing them with different wall thicknesses and geometries. 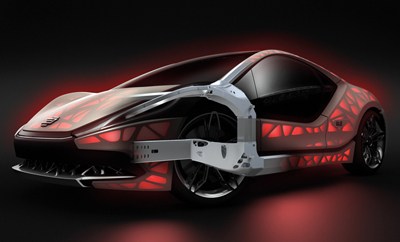 The EDAG concept car, called Light Cocoon is a compact sports car, covered with an outer skin made from weatherproof textile material. The EDAG Light Cocoon was unveiled in March 2015 at the Geneva Motor Show and in September 2015 at the International Motor Show in Frankfurt.

The devlopment partnership commented that the Light Cocoon is “intended to polarize opinions among designers and break open existing thought patterns in vehicle design”. They added: “the bodywork structure embraces bionic patterns and translates them into a lightweight bodywork structure. A concept car that highlights sustainable approaches and at the same time embodies the technological potential of additive manufacturing.”