But revenues slide in the latest financial quarter as demand from LED producers remains weak.

Sapphire specialist Rubicon Technology says that it is “on track” with the development of much larger crystals of the material for new optical applications.

With demand from LED and other semiconductor chip makers in the doldrums – partly a result of the market disruption created by Apple’s aborted foray into sapphire covers for its iPhones with GT Advanced Technologies – Illinois-based Rubicon needs to diversify the applications base for the material.

The company has just posted another sharp decline in revenues in the closing quarter of 2015, with sales of $2.5 million leading to a quarterly net loss of nearly $13 million. It means that for 2015 overall, Rubicon made a net loss of $78 million as sales halved year-on-year to $23.8 million.

Bill Weissman, Rubicon’s CEO, said: “There continues to be excess sapphire capacity in the market. However, we are working with developers of some very interesting potential new applications for sapphire which fit particularly well with Rubicon’s unique set of sapphire knowledge and capabilities.”

Exactly what those applications are and whether they come to fruition remains to be seen, but Weissman told investors: “For the largest of these opportunities, we believe a decision will be reached on the use of sapphire in this unique product in the next six months.

“We feel we are well-positioned to become an important part of the supply chain and that meaningful volumes could begin later this year with significant ramp of this application projected in 2017 and beyond.”

LANCE project for ‘massive’ windows
Key to the potential new application is the so-called “LANCE” crystal growth technique, which the company has been developing under a $4.7 million US Air Force-funded project over the past three years.

“We are on track to complete our LANCE crystal growth deliverables this year, producing windows as large as 36 by 18 by 2 inches, which are unprecedented in the market,” Weissman said.

LANCE is short for “Large-Area Net-shape Crystal Extraction”, and the new approach is designed to grow panels approximately two inches thick that can then be cut into multiple rectangular windows of varying thickness to meet the needs of both defense and commercial applications.

“We are currently producing larger windows for semiconductor and defense applications from our large Kyropoulos boules, up to 13 inches in diameter,” Weissman said. “And we will be increasing that to 16 inches this year. While others can grow crystals of comparable size, most cannot meet the quality of the requirements.”

The CEO added: “There is significant customer interest in these massive windows and we believe that moving this technology from development to production over the next couple of quarters adds significant value to our optical business.

“LANCE is a unique technology, which greatly strengthens our technology platform and this business unit and gives us a strong foundation of becoming the dominant supplier of large-area sapphire optical products within the next one to two years.”

While the company is understandably tightening its purse strings in the current market environment, it is splashing out more than $1 million on a new production coating tool that will be delivered in May.

“This tool will enable us to provide the higher volume samples and pilot production capacity which are required for customers to fully qualify and commercialize new products,” Weissman said. “Our samples for this product in our initial focus market have performed well in customer testing.”

While there is, in Weissman’s words, “a lot going on” on the developmental front over the next six months, the current commercial market remains weak. On the plus side, more LED chip makers are expected to begin adopting six-inch sapphire for their wafer production – something that should result in cheaper solid-state lighting. 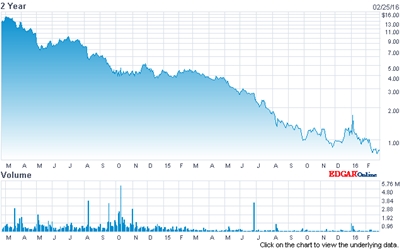 “We believe four-inch wafer pricing is now at or below cash cost and not likely to get much lower,” the CEO reported. “Therefore, we expect to see chip manufacturers put a greater focus on six-inch migration going forward.”

As a result for the current quarter, Rubicon expects sales to bounce back somewhat, to between $4 million and $5 million. However, the Apple-related market disruption, in combination with the prolonged period of weak demand from LED makers, has seen the company’s stock price plunge more than 90 per cent over the past two years – Rubicon is now trading below its book value on the Nasdaq exchange.