Combination of near-infrared light and aquatic photosensitizer clears early-stage disease in half of men treated in major European trial. 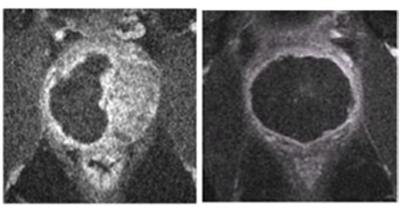 PDT prostate treatment: before and after

A large clinical trial across 47 European hospitals has shown laser photodynamic therapy (PDT) to be an effective treatment for early-stage prostate cancer, with no side effects.

Surgeons have just published the results of their randomized controlled study on more than 400 men in the journal Lancet Oncology. They found that, of the 206 patients to receive PDT, 101 (49 per cent) had a negative biopsy result when tested two years after the treatment, while in 58 (28 per cent) the disease had progressed.

At the same time, of the 207 men in the “active surveillance” group – who did not receive PDT – only 28 (14 per cent) showed a negative biopsy at the two-year follow-up, while 120 (58 per cent) tested positive for disease progression.

Destructive interaction
Speaking to the BBC’s Today radio program the paper’s lead author Mark Pemberton, a professor at University College London, said: “Interaction between the laser and photosensitizer destroys the cancer cells, and also – importantly – the blood vessels that supply the tumor.”

Pemberton also highlighted how those treated with PDT were much less likely to require “radical” treatment after the two-year follow-up, and said that the lack of side effects was a key finding.

That is because the slow-growing nature of most forms of prostate cancer present men with a difficult dilemma when they are diagnosed. Depending on the exact and size and position of a tumor, current treatments can have various significant side effects, including urinary incontinence and erectile dysfunction – often “over-treating” men with a low-risk cancer.

As a result, many patients are advised to wait and see if the disease progresses – risking the under-treatment of men before they are diagnosed with a higher-risk variant of prostate cancer. But with the advent of widespread prostate-specific antigen (PSA) screening over the past 20 years, millions more men are now facing that dilemma than in the past.

For them, the PDT treatment now appears to offer a much less invasive option, with none of the side effects of surgery or radiotherapy, while simultaneously reducing the likelihood of cancer progression.

The results of the Phase 3 European trial come a few months after health authorities in Mexico approved the PDT technology for use in Mexico, after a separate trial in Latin America showed similarly positive results. While the treatment is not yet available in Europe, Steba Biotech - which makes the PDT drug, called "Tookad", and funded the trials - applied to the European Medicine Agency (EMA) for its approval in January 2016.

Steba's CEO Raphael Harari said at the time: "The submission of the MAA (market approval application) for Tookad is a major milestone for Steba Biotech and we look forward to working closely with the EMA during the review period. If approved, Tookad would provide physicians and patients with a unique innovative solution to manage low-risk prostate cancer."

(Free) radical solution
Although the treatment is new, the technology behind it is the result of several years of research at the Israel’s Weizmann Institute of Science and its collaboration with Luxembourg-headquartered Steba.

The key scientists involved in the development are Weizmann professors Avigdor Scherz and Yoram Salomon. They first synthesized the photosensitive drug from a natural bacteriochlorophyll - the part of an aquatic bacterium that is able to convert sunlight into energy, similar to the way that plants use chlorophyll.

When injected into the bloodstream, that non-toxic photosensitizer stays in the patient’s blood stream for around four hours. During that time, illumination around the diseased tissues with a 735 nm laser activates the circulating drug locally, generating highly reactive oxygen and nitric oxide radicals that destroy the tumor and its blood supply - but without damaging nearby structures.

“The use of near-infrared illumination, together with the rapid clearance of the drug from the body and the unique non-thermal mechanism of action, makes it possible to safely treat large, deeply embedded cancerous tissue using a minimally invasive procedure,” explains Weizmann.

Weizmann licensed the drug to Steba via the Yeda Research and Development Company, the institute’s technology transfer wing. Steba now manufactures a soluble version of Tookad.

Following the successful Latin America and European studies, Steba is now engaged in further trials in the US, in partnership with clinical groups at the Memorial Sloan Kettering Cancer Center in New York City – for both advanced prostate cancer treatment and other oncology indications.

The Weizmann-Steba team has been working together on the technology for nearly two decades already - indicating the extra regulatory complications associated with PDT because of its combination of new drugs and new equipment. As a result of that additional complication and cost, many promising PDT treatments have failed to come to fruition. The apparent success of the prostate cancer application may see the technology finally emerge as a mainstream treatment option.