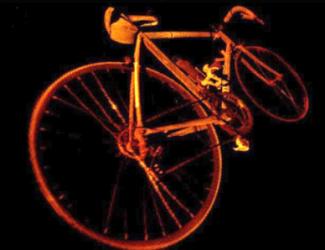 The value of optical coherence tomography (OCT) as a technique for micrometer-resolution sub-surface imaging is well established, with new applications now being added to its existing success in ophthalmology and medicine.

Its imaging range has usually been restricted to a few centimeters, however, inevitably placing a limit on some of the potential uses for it that developers can envisage.

A project group under OCT-pioneer James Fujimoto at MIT, and including industrial participants Thorlabs, has now drastically boosted that limit, and demonstrated 3D imaging over cubic-meter volumes. The results were published in Optica.

"Our study demonstrates world-record results in cubic-meter volume imaging, with at least an order of magnitude larger depth range and volume compared to previous demonstrations of three-dimensional OCT," said Fujimoto. "These results provide a proof-of-principle demonstration for using OCT in this new regime."

In the published paper, the team describe high speed, 3D OCT imaging of 15-micron resolution over a 1.5-meter area. Subjects imaged included a mannequin, a bicycle, and models of a human brain and skull.

One key component in the achievement was a MEMS-tunable vertical cavity surface-emitting laser (VCSEL) centered on 1310 nanometer irradiation, developed by Thorlabs and Praevium Research specifically to have a suitable long coherence length. Thorlabs' work on advanced VCSEL architectures has indicated ways to counter the often detrimental effects of swept-source OCT (SS-OCT) implementations on coherence length, where the methods and components used to tune multiple laser modes can combine to limit the imaging depth to a few centimeters.

Optical communications breakthroughs
"Research by our group at MIT and our collaborators at Praevium Research and Thorlabs indicated that the coherence length of the VCSEL source was orders of magnitude longer than other swept laser technologies suitable for OCT, which suggested the possibility of long-range OCT imaging," commented Ben Potsaid of MIT and Thorlabs.

Equally significant for this project were recent developments in light detection and data acquisition, and the project was the first demonstration of a new photonics integrated circuit (PIC) system operating at 1310 nm for OCT, according to the team.

This PIC exploits current advances made by the optical communications sector in the integration of waveguides, phase shifters, and other optical elements. The circuit supports the high electrical frequencies and wide range of wavelengths required for SS-OCT, replacing a large subsection of an equivalent fiber-optic OCT interferometer with integrated optics on a silicon chip.

To test the potential of meter-range OCT for imaging human-scale targets, the team imaged a mannequin sat at a chess board and a full-size bicycle, sampling volumes of 0.98 and 1.8 m3 respectively. Images of a human skull and brain were used to indicate the potential for macroscopic anatomical imaging.

Although such medical applications may well exploit an OCT modality with extended capability and find uses for it in the centimeter-imaging range, the MIT team anticipates that the majority of applications requiring a true meter-scale range will be in metrology, process monitoring, non-destructive evaluation, and related areas. To help facilitate this, the next steps in the research include speeding up the data acquisition and processing steps further, through the use of low-cost and high-speed components, perhaps eventually allowing real-time OCT imaging via customized integrated circuit chips.

"As PIC technology continues to advance, one can realistically expect full OCT systems on a single chip within the next five years, dramatically lowering the size and cost," said the paper's co-author Chris Doerr. "This would allow more people all over the world to benefit from OCT and open up new applications."