New study is based on data from a NASA's laser satellite instrument orbiting Earth; implications for observing atmospheric conditions. 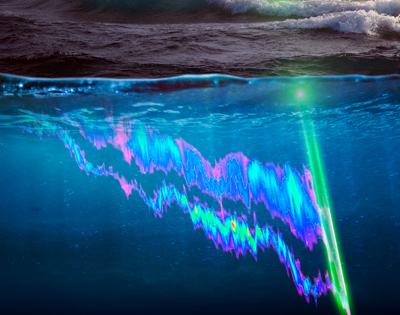 Small, environmental changes in polar food webs significantly influence the boom-and-bust, or peak and decline, cycles of phytoplankton, according to a new study based on data from a NASA satellite instrument orbiting Earth. The main information gathering is achieved by illuminating undersea life with a green laser.

These findings are expected to provide important data for ecosystem management, commercial fisheries and understanding of the interactions between Earth's climate and key ocean ecosystems. Populations of plankton are seen to rise and fall depending on a range of variables, many climate-related, which impact fish populations along the foodchain.

Michael Behrenfeld, a marine plankton expert at Oregon State University in Corvallis, commented, "It's really important for us to understand what controls these boom-and-bust cycles of plankton numbers, and how they might change in the future, so that we can better evaluate the implications for other parts of the food web."

Phytoplankton also influence Earth's carbon cycle. Through photosynthesis, they absorb a great deal of the carbon dioxide dissolved in the upper ocean and produce oxygen, which reduces the amount of carbon dioxide in the atmosphere.

Behrenfeld, along with scientists from NASA's Langley Research Center in Hampton, Virginia, and several other institutions collaborated on the study. The work has recently been published in Nature Geoscience.

This new understanding goes against traditional theories that blooms only occur when phytoplankton growth rates exceed a specific threshold of fast growth and that they end when these growth rates fall below that threshold again. 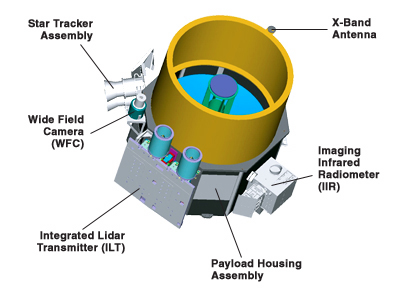 Out of space: The layout of the payload, with key instrument characteristics detailed.

NASA's Cloud-Aerosol LIdar with Orthogonal Polarization (CALIOP), an instrument aboard the Cloud-Aerosol Lidar and Infrared Pathfinder Satellite Observation (CALIPSO) satellite launched in 2006, uses a laser to take measurements. Scientists have used the instrument to continuously monitor plankton in polar regions from 2006 to 2015.

Chris Hostetler, a research scientist at Langley, commented, “CALIOP was a game-changer in our thinking about ocean remote sensing from space. We were able to study the workings of the high-latitude ocean ecosystem during times of year when we were previously completely blind."

Ocean ecosystems typically are monitored with satellite sensors that simply measure sunlight reflected back to space from the ocean. These instruments have a problem observing ocean plankton in polar regions because of limited sunlight and persistent clouds. The new system’s lidar produces its own light – by laser – and can illuminate and measure the plankton day or night, and even through certain clouds.

The study also reveals that year-to-year variations in this constant push and pull between predator and prey have been the primary driver of change in Arctic plankton stocks over the past decade. In the Southern Ocean around Antarctica, changes in the ice cover were more influential on phytoplankton population fluctuations than were any differences in growth rates and predation.

"The take home message is that if we want to understand the biological food web and production of the polar systems as a whole, we have to focus both on changes in ice cover and changes in the ecosystems that regulate this delicate balance between predators and prey," said Behrenfeld. The current CALIOP lidar was engineered to take atmospheric measurements, not optimized for ocean measurements. Nonetheless, the CALIOP ocean measurements are scientifically valuable, as demonstrated by the results of this study.

No newer lidar technology is being tested that Could allow scientists to better measure how phytoplankton are distributed through the sunlit layer of the ocean. This new capability is expected to improve knowledge of phytoplankton concentrations and photosynthesis, and it will also reveal more about the causes of phytoplankton blooms. This knowledge is critical for understanding the cycling of ocean carbon, and for determining and managing the health of global ocean ecosystems.

The CALIPSO satellite mission is a collaboration between NASA and France's space agency, the Centre National d'Etudes Spatiales. The University of Maine in Orono, the University of California, Santa Barbara, and Princeton University also participated in the study.