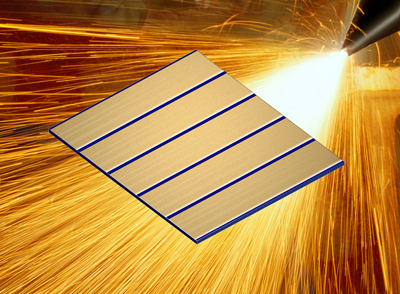 Osram Opto Semiconductors (OS) has produced a broad area laser diode with what it claims is a “record” lateral brilliance of up to 4.8 W/(mm*mrad) in the laboratory.

The company stated, “The more brilliant the laser, the more efficiently it can inject its light into optical fibers. This then increases the output power of modules for pumping fiber lasers used for material processing.”

This achievement is one of the results of the project Integrated microoptical and microthermal elements for diode lasers of high brilliance, (IMOTHEB), started in 2012, which was funded by the German Federal Ministry of Education and Research and which has recently been successfully completed.

The lateral brilliance of up to 4.8 W/mm*mrad is one of the highest known values for broad area laser diodes, stated Osram OS, which added that optimization of the chip design provided the basis for this success, particularly the integration of microthermal and microoptical elements for beam shaping on the chip.

The improvements were made in the course of the IMOTHEB research project, which was coordinated by Osram. One of the aims of the project was to further develop laser chips so that they could delivere greater optical output power with constant beam quality.

As one of the project partners the Max Born Institute provided considerable support for the chip development work in the form of extensive methodologies and analyses. The findings will now successively flow into product development.

An important application of fiber-coupled lasers is the pumping of high-power lasers for material processing. Fiber lasers in particular, says Osram’s announcement, are gaining in importance, for example for cutting and welding sheet metal in the automobile industry. At the same time, there is growing pressure on costs.

The aim of IMOTHEB was therefore to reduce the system costs for such pump modules. Project partner Dilas Diodenlaser researched concepts for the automated assembly of diode lasers. Another key factor was the brilliance of the laser sources. Dilas used a demonstration module to show that the improved Osram chips were capable of increasing the output power of the module by 10 per cent.

“Because the chip is more brilliant, more light goes into the fiber”, explained Dr. Alexander Bachmann, Project Coordinator at Osram Opto Semiconductors. “The same module produces a higher output power than is possible with the laser diodes currently used in this application.”