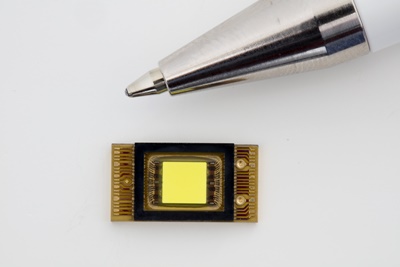 High-resolution LED-based “digital” headlamps that adapt to road and weather conditions will be ramped to serial production by 2020, after a research project involving Osram and Daimler showed the technology’s “enormous potential”.

Funded over three and a half years by the German Federal Ministry of Education and Research (BMBF), the "µAFS" project has realized new LED chips that each deliver more than 1000 points of light. And in tests conducted by Daimler, headlamps featuring three of those chips adapted to road conditions, increasing brightness and range where necessary but without dazzling oncoming drivers or other road users.

Complementing lasers
Osram told optics.org that it regards the LED technology as complementary to similar laser-based adaptable headlamps that it previously developed with key partner BMW, now used in the new “7 Series” range of vehicles and shortlisted for this year's German Future Prize.

“The smart pixel headlight will enable totally new headlight features [such] as finely tuned glare prevention when driving with LED high beam,” said Osram. “The brightness of any pixel in the headlamp can be dimmed (not only turned on and off) in a wide range. Therefore a road sign would be highlighted with a reduced brightness to avoid the driver being dazzled by the reflection of his own light beam.”

Osram added: “A pedestrian could be illuminated in a higher brightness [than] the rest of the scene to highlight him, while his head can be spared to prevent dazzle for him.”

In contrast, the extremely bright laser-based headlamps offer an unprecedented range of illumination (up to 600 meters), and could be used in combination with the new LED matrix if car makers wish to do so. 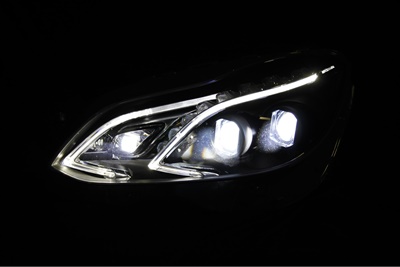 However, the BMBF-funded project has increased the number of individual light points that make up the forward illumination by more than an order of magnitude. Using three of Osram’s chips, the latest prototype headlamps effectively have a “resolution” of 3072 controllable pixels.

The new headlamps are also able to adapt to different road conditions with fully electronic control, with no need for mechanical actuators – a key step towards the deployment of “digital” automotive lighting.

“You can light up a wider angle without using any kind of mechanics, just electronically,” Osram explained. “In the demonstration model we used three light sources with 1024 pixels each - but as the chip is as small as a fingernail and the control electronics is included, you could use more than three such LED chips and thus further enhance the resolution and the width of the illumination.”

Laser defect repair
Osram notes that one of the major technological challenges related to the comparatively large size of the chip and its 1024 individually controllable pixels. “As the LED chip size increases it raises the risk of failure or decreased luminosity of the individual pixels in the pixel matrix during the production process,” explained the firm.

To solve this problem, project partners at the Fraunhofer Institute for Applied Solid State Physics (IAF) in Freiburg developed a new technology for defect repair based on ultraviolet laser micromachining.

“First, the microscopic defects are identified and removed with a UV laser through careful material removal, or electrically isolated without the laser inadvertently causing new defects, what are known as leakage current paths,” reported Osram. Once repaired, the pixels regain their full luminosity and homogeneous output.

Among the other project partners was semiconductor firm Infineon Technologies, which developed the LED matrix driver circuitry that allows each of the 1024 pixels to be controlled individually.

In the current generation of adaptive headlamps, the LED components are installed as segments, side-by-side and on top of each other, with additional electronics needed to switch the various light segments on and off.

But while Osram says that the number of segments is limited by the restricted space in the headlamp design, in the new approach integrates on-chip electronic activation of the LED, resulting in a much higher resolution while meeting limited space requirements. 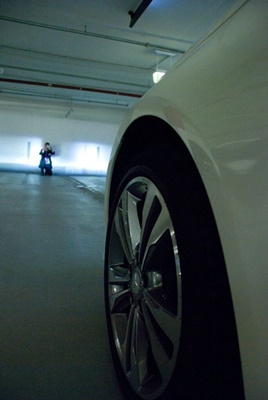 Serial production plans
During the project, headlamp specialist Hella developed both a new optical system for the light modules and a cooling concept. It also built the prototype headlights tested under real traffic conditions in a Daimler vehicle.

The next stage of development will involve selecting an assembly technique with which to scale up production. Two different assembly techniques were investigated in the project: thermocompression bonding with porous gold "nano-sponge", and reflow soldering with a highly reliable gold-tin alloy.

Osram says that both these approaches delivered a high yield and a robust interface for subsequent LED processing steps, and sees a relatively straightforward route to mass production.

Stefan Kampmann, Osram Licht’s CTO, said in a company release: “We now want to develop this new type of high-resolution LED light source so that it’s ready for serial production, and we see enormous potential for its use in headlights.”

The company added: “We expect headlights using the new smart pixel LED light source to be installed in cars by the end of this decade.”