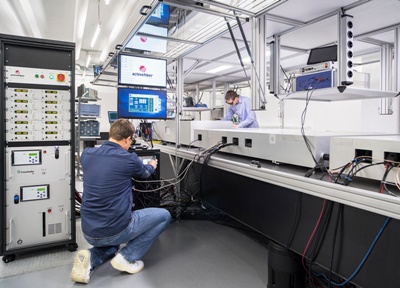 Fingers on the pulse: the Jena team's ultrafast laser system

Researchers in Germany say that their new laser source being developed for the Extreme Light Infrastructure (ELI) project in eastern Europe has set a world record for power output with a “few cycle” pulse duration.

The Jena-based team, comprising the Friedrich Schiller University, the nearby Fraunhofer Institute for Applied Optics and Precision Engineering (IOF), and local start-up company Active Fiber Systems, have built a system delivering 216 W average power from a train of 6 fs pulses.

1 mJ target
That compares with the previous best of 53 W from 8 fs pulses, and represents a significant step towards the targeted energy output of 1 mJ at a repetition rate of 100 kHz (equivalent to an average power of 100 W) needed for ELI, said to be "well beyond the current state-of-the-art".

Jens Limpert from the Jena team told optics.org that further progress towards that performance goal has already been made. Limpert and colleagues are now working to tweak the system before its scheduled shipment to ELI-ALPS in Szeged, Hungary, early next year.

Described in a recent Optics Letters journal paper, the system is based around a femtosecond fiber laser and features two non-linear compression stages. That pump source incorporates a fiber chirped-pulse amplification (FCPA) system with a coherent combination of up to eight main amplifier channels. For some of the first tests, the system was run at 1.27 MHz, delivering 660 W.

The two non-linear compression stages are based on noble-gas-filled capillaries. The first stage produced a 408 W output with a laser pulse length of about 30 fs (equivalent to 320 µJ pulse energy).

After the second stage and a subsequent compression, the system delivered 208 W from 6.3 fs pulses, which correspond to less than two cycles at a center wavelength of 980 nm. “The waveguiding of the capillaries led to an excellent beam profile,” points out the team.

Watching electrons in motion
While the current specifications are unprecedented, the ultimate version of the system deployed in Szeged should be even more remarkable, with much higher pulse energies of 5 mJ planned.

The Jena development team say that when they met with funding agencies last month to discuss interest in ELI-ALPS beam time, as many as 70 per cent of the participants indicated that they wanted to work with the system.

In Szeged, it will be used to create attosecond pulses at a high repetition-rate. Attosecond pulses of light are so short that they will allow researchers to follow the motion of electrons – something expected to yield fundamental new insights into atomic, molecular, and solid-state physics, as well as new disciplines such as plasmonics.

While attosecond laser systems have been developed over the past few years, the high repetition-rate envisaged for ELI-ALPS will offer scientists a light source that combines unprecedented capability with the kind of practicality needed in a user facility.

ELI-ALPS is one of three new laser facilities at various stages of completion in eastern Europe. Funded with more than €850 million, largely via the European Regional Development Fund (ERDF), the giant systems in the Czech Republic, Hungary and Romania are now taking shape.

The building containing the facility in the Czech Republic, known as ELI Beamlines, was the first of the three to be completed. ELI's various laser installations should be finished by 2018, after which the facilities will offer experimental beam time granted according to the scientific merit of user proposals.

€111 million in funding for the ELI-ALPS facility was approved in 2014, with Dimitris Charalambidis from the Foundation for Research and Technology - Hellas (FORTH) on the Greek island of Crete elected its scientific director, along with Károly Osvay as research technology director. Some 250 scientists are expected to be involved in the project by 2020.