Prototype device combines functions of an antenna and a rectifier diode component at optical wavelengths. 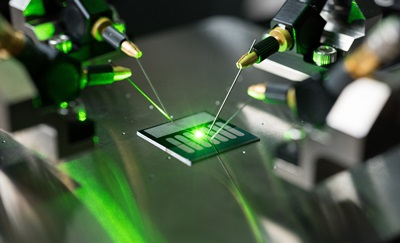 Researchers from Georgia Institute of Technology in the US are claiming a world first with the fabrication of a new kind of optical device that combines the function of a photodetector and a rectifier diode.

Although the early-stage “rectenna” is not very efficient, the Georgia Tech team says that future versions could provide a new kind of photodetector that would be able to operate without the need for cooling.

Other possibilities include energy harvesters to convert waste heat to electricity, and perhaps even a new way to efficiently capture solar energy, reports the team in a Nature Nanotechnology paper just published.

The optical rectenna is based on carbon nanotubes, used to detect light in the optical region of the spectrum, while also featuring tiny rectifier components that convert the signal into a tiny current.

“As the waves of light hit the nanotube antennae, they create an oscillating charge that moves through rectifier devices attached to them,” explain Georgia Tech associate professor Baratunde Cola and colleagues. “The rectifiers switch on and off at record high petahertz speeds, creating a small direct current.”

Commercial potential
While a single rectenna produces only a tiny amount of electrical current, billions of them fabricated in an array could produce a useful amount, though the efficiency of the devices demonstrated so far is less than one percent.

Despite that the research team believes that an optimized rectenna “with commercial potential” could be available in as little as one year. That is partly because even the first versions operate at temperatures of up to 77°C.

“We could ultimately make solar cells that are twice as efficient at a cost that is ten times lower, and that is to me an opportunity to change the world in a very big way,” claims Cola, who works in Georgia Tech’s George W. Woodruff School of Mechanical Engineering.

He adds: “As a robust, high-temperature detector, these rectennas could be a completely disruptive technology if we can get to one percent efficiency. If we can get to higher efficiencies, we could apply it to energy conversion technologies and solar energy capture.”

The US military has backed the early-stage research, with support arriving via the Defense Advanced Research Projects Agency (DARPA), the Space and Naval Warfare (SPAWAR) Systems Center, and the Army Research Office (ARO). 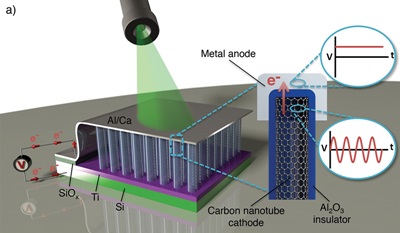 Optical challenge
Rectennas are not a new concept, having been fabricated as long ago as the 1960s. However, those operated at wavelengths of around 10 µm – and attempts to produce similar devices to operate at optical wavelengths had so far proved unsuccessful.

One of the critical challenges has been to make the antennae small enough to couple with light at optical wavelengths, along with a similarly tiny rectifier diode able to operate at the high speed needed to capture the electromagnetic wave oscillations.

“The physics and the scientific concepts have been out there,” said Cola. “Now was the perfect time to try some new things and make a device work, thanks to advances in fabrication technology.”

The final step involves physical vapor deposition of thin, optically transparent layers of calcium then aluminum metals on top of the nanotubes. According to the team, the difference of work functions between the nanotubes and the calcium provides a potential of about two electron volts, enough to drive electrons out of the carbon nanotube antennae when they are excited by light.

Efficiency target
Cola sees the devices built so far as a proof of principle, suggesting that other materials could be used to increase their efficiency dramatically. He also plans to grow them on a foil or other flexible material that would allow production of flexible solar cells or photodetectors.

“A rectenna is basically an antenna coupled to a diode, but when you move into the optical spectrum, that usually means a nanoscale antenna coupled to a metal-insulator-metal diode,” he explained. “The closer you can get the antenna to the diode, the more efficient it is. So the ideal structure uses the antenna as one of the metals in the diode - which is the structure we made.”

“We think we can reduce the resistance by several orders of magnitude just by improving the fabrication of our device structures,” Cola added. “Based on what others have done and what the theory is showing us, I believe that these devices could get to greater than 40 percent efficiency.”