Subsidiary will work in close cooperation with laser diode experts at the local Ferdinand-Braun-Institut. 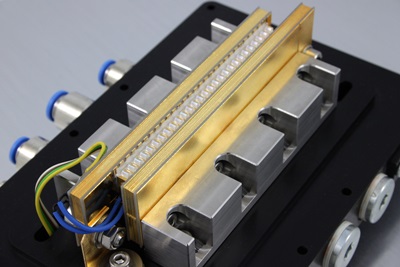 The development center will have an initial staff of ten people and be located near the Ferdinand-Braun-Institut (FBH), with which Trumpf will also collaborate closely.

Trumpf’s research chief Berthold Schmidt said in a company release: "We're attempting to look ten years ahead here, and to lay the foundations for future applications."

FBH director Günther Tränkle added: "We're looking forward to cooperating directly with Trumpf in the active Berlin research landscape. The joint venture underlines the capability of our FBH teams, as well as the desire, even of major players, to maintain and further extend their market lead with our assistance."

The two parties have been working together on high-brilliance, high-power diodes for several years, while Trumpf already funds several PhD studentships at FBH. "Over the past years our research activities have resulted in numerous patents, enabling further improvements to diode lasers," says Tränkle. "The demand is there and will continue to grow, because the market for laser systems that can process and cut metals is vast."

FBH spin-offs
Trumpf’s Stephan Strohmaier is heading up the new Berlin subsidiary. He said: "For cutting thick sheet metal, a very powerful laser beam is required. Our goal is to efficiently combine ever more laser power inside an ever more brilliant beam – and we're getting better at it all the time."

FBH is regarded as one of the world’s leading centers of excellence in developing state-of-the-art photonic and electronic devices based on compound semiconductor materials, and is a regular participant in European and German government-funded projects to advance the performance of both optical and radio frequency chips.

FBH spin-off companies have included the laser diode firm Eagleyard photonics, which was acquired by Toptica in early 2013, while a previous collaboration with optics firm Jenoptik resulted in the Jenoptik Diode Lab that remains located close to the FBH site in Berlin-Adlershof.

Meanwhile Trumpf is set to release details of its laser division’s financial performance when the firm’s executives release its annual report on October 22.