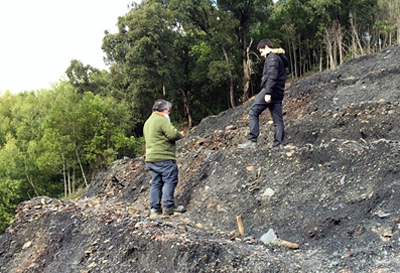 The coal truth: Two of the researchers fitting sensors in a spoil heap in Portugal.

The ECOAL-MGT two-year project, which is designed to minimize the environmental problems caused by coal waste slag heaps located near forests, has successfully been completed following tests carried out in San Pedro da Cova, Portugal.

Key to the success of the project was the development of new rugged gas and temperature sensors based on photonic crystal optical fibers. The positive outcome of the project was recently described by the lead researchers during the final workshop, held in the Portuguese locality of Gondomar.

Prof Manuel López-Amo Sainz, coordinator of the NUP/UPNA team of researchers, announced that an integrated optical system had been developed to measure the temperature and levels of contaminating gases caused by piles of coal waste residues.

He said, “This waste matter resulting from mining activity can burn spontaneously, reach temperatures in excess of 300˚C internally and be continuously burning and spreading the combustion area to nearby forests and cause health problems for nearby populations.”

Combustion usually takes place in piles close to disused mines and which can cover broad areas. Prof. Sainz added, “What we have here is a worrying phenomenon that is seriously affecting several mining zones in a number of countries.”

In the final phase of this project, which started in 2012, an ongoing study was made of coal slag heaps. The researchers used new optical monitoring techniques to allow the hazards and their evolution to be identified so that action could be taken in time to minimize the negative impact of this waste material.

Researchers Manuel López-Amo Sainz, Rosa Ana Pérez-Herrera, Ana Pinto, Aitor López-Aldaba, Silvia Díaz-Lucas, Alayn Loayssa-Lara and Sergio Rota-Rodrigo (all from NUP/UPNA-Public University of Navarre, Spain) worked on the development of the multiplexing system of point sensors for gases including CH4, CO2 and NH3, and temperature. The team developed new temperature sensors using photonic crystal optical fibers capable of withstanding the high temperatures on the land that needed to be monitored.

The system was successfully installed at San Pedro da Cova, Portugal, and was designed using the latest technology in optical fiber point sensors for gas sensing and distributed fiber sensors for temperature. This approach enabled a remote, multi-point measurement to be conducted in the target areas of land.

Measurements were obtained of the levels of toxic gases generated by the slag heaps and being exposed to the neighboring populations. The temperature variation data inside the waste were analyzed to detect the most likely directions of propagation of the zone in combustion.

The project ECOAL-MGT: Ecological Management of Coal Waste Piles in Combustion was co-funded by the European Union through its ERDF (regional) funds within the Territorial Cooperation Programme of the Southwest European Space-SUDOE. Researchers from various institutions in Portugal (University of Oporto and INESC), Spain (NUP/UPVA-Public University of Navarre and the University of Alcalá, Madrid) and France (University of Limoges and the XLIM Research Institute) participated.

ECOAL-MGT was one of the 21 projects approved from among the 319 submitted within the 2012 call. The project had the advisory assistance of SODENA through its CEO Carlos Fernández Valdivielso, who was the Spanish expert proposed by the consortium.