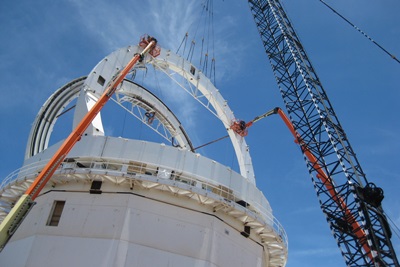 A crucial part of the adaptive optical system for what will become the world’s largest telescope for solar observations has been accepted by the team building it.

The 4-meter diameter Daniel K. Inouye Solar Telescope (DKIST), currently under construction on Haleakala on the island of Maui, Hawaii, is set to offer unprecedented high-resolution images of the sun, thanks in large part to the 1600-actuator deformable mirror fabricated by Northrop Grumman subsidiary AOA Xinetics.

Led by the National Solar Observatory (NSO) and the Association of Universities for Research in Astronomy (AURA), DKIST is expected to help scientists better understand how magnetic fields affect the physical properties of the sun, what roles they play in our solar system and how they affect Earth.

To correct for atmospheric distortions, the DKIST mirror features an actuator density four times the normal level. It also has an internal thermal management system to handle the intense solar energy collected by the DKIST telescope optics.

"The science DKIST will produce is groundbreaking and transformational for solar astronomy," said Thomas Rimmele, DKIST project director at NSO. "The AOA Xinetics mirror is the highest-performing DM (deformable mirror) I've ever observed and it will help us revolutionize solar imaging."

AOA XInetics says that the actuators were used to correct the mirror's surface to an average error of just 4 nanometers. The firm’s chief scientist and program manager Jeff Cavaco said:

"There will always be challenges when you do something that's never been done before that others have failed to achieve. But fortunately, we have a team of incredibly experienced and talented engineers and technicians who rose to the occasion and built this ground-breaking mirror.”

Protest response
Funded by the National Science Foundation (NSF), DKIST is managed by AURA and NSO, with no fewer than 22 institutions collaborating on the international project.

Although it will deliver some ground breaking science once completed, in around four years’ time, its construction has caused some controversy in Maui, where its site at the summit of the 10,000-foot Haleakala mountain – seen by some as sacred – has been subject to protests.

In June, Rimmele and the DKIST project manager Joseph McMullin issued a statement saying: “DKIST began with a ground survey over a decade ago. The project made concerted efforts to identify and mitigate cultural and environmental impacts associated with the construction of what will be the world’s most powerful solar telescope.

“Throughout the DKIST planning process and initial construction, DKIST consulted local officials, Native Hawaiians, and other stakeholders to ensure the project respected views and adjusted plans as appropriate.

“DKIST will allow astronomers to glean new insights into the sun and to discover how our nearest star works. This information about the sun and its effects on Earth will serve to protect our local and global environment, aviation operations and vital infrastructure, including the power grid as well as communication and weather satellites.”

Magnetic field investigation
More specifically, scientists are hoping to use DKIST to explain how cosmic magnetic fields – responsible for solar flares that can potentially cause huge disruption on Earth – are generated and destroyed.

Among the key questions to be answered are working out how those magnetic fields affect plasma structures and releases of energy, and why exactly the sun’s activity varies with time.

“The field of solar physics has developed rapidly over the last decade to a point where sophisticated theories and models await critical observational tests,” states the DKIST team. “But existing instrumental capabilities are no longer sufficient to meet this challenge. The recent demonstration of a practical adaptive optics system, coupled with other advances in unique and powerful instrumental techniques, now promises a major advance in solar observing capabilities.”

DKIST will be able to make observations across the ultraviolet, visible and infrared range, with coverage from 300 nm through 35 µm. The large diameter of the telescope is needed to resolve details of the sun’s corona in sufficient detail.

“Current solar telescopes cannot resolve such scales because of their limited aperture,” DKIST scientists say. “The near-infrared spectrum around 1.5 µm has many advantages, particularly for magnetic field studies; an aperture of 4 meters is needed to clearly resolve features at 0.1 arcsec in the near-infrared. Access to even longer wavelengths in the thermal infrared requires an open-air telescope design.” 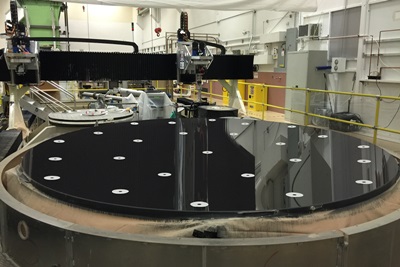 Among the state-of-the-art kit at DKIST will be a cryogenic near-IR spectro-polarimeter and a fiber-based diffraction-limited near-IR spectropolarimeter, both developed at the nearby University of Hawaii.

In addition to that an NSO team is building a visible broadband imager, while collaborators at Germany’s Kiepenheuer Institut für Sonnenphysik in Freiburg are working on an innovative visible tunable filter (VTF) to spectrally isolate narrow-band images of the sun at the highest possible spatial and temporal resolution.