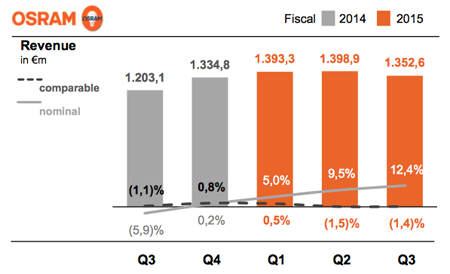 Diversified lighting and LED manufacturer Osram, in its third quarter 2015 financial statement, announced today, said it is continuing to show a good profit performance. Earnings rose 24% from one year earlier to €129 million, equating into a margin of 9.5%.

The company said its development “was driven by cost savings as well as positive currency effects”. Q3 revenue increased 12% to almost €1.4 billion due to a combination of the weakness of the euro against key currencies and the acquisition of Clay Paky, completed in October 2014.

On a comparable basis, i.e. adjusted for portfolio and currency effects, revenue actually declined by around 1%, which the company described as: “remaining almost stable”. The revenue share of LED-based products and solutions was 44 percent in the third quarter. Net income rose to €64 million. In its statement of today, Osram confirmed the outlook for fiscal 2015 as updated in April. The previously-agreed carve-out of the company’s general lighting lamps business is now set to be completed by the spring of 2016.

“Overall, we can look back on a good quarter,” said Olaf Berlien, Chief Executive Officer of Osram Licht AG. “Our current priority is the realignment of the company, which we are pursuing at full speed. The carve-out of our lamps business is in this respect just the beginning of the path toward a new Osram, which will focus on connected and smart lighting.”

Osram's “carve-out” of its Lamps division is on track for spring 2016.

Osram confirmed the outlook for 2015 that it announced in April 2015. The managing board stated that it expects this year’s revenue to be “on the level of fiscal 2014 on a comparable basis”. The company’s statement of today said, “adjusted EBITA margin for 2015 is expected to be above 9.0%. The company expects both net income and return on capital employed will decrease sharply in 2015, stating: "due to an increase in transformation costs; free cash flow is expected with a positive triple-digit million euro figure in fiscal 2015 but it will stay below the 2014 level.”