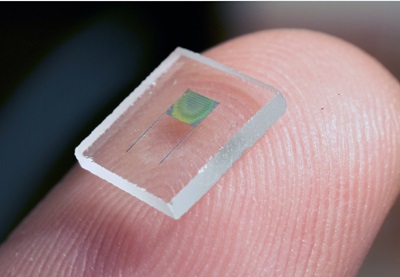 by Andrew Williams
A team led by materials science and engineering professor Paul Braun at the University of Illinois at Urbana-Champaign (UIUC) has combined two lithography techniques to make a tiny lithium ion battery said to be suitable for large-scale, on-chip microelectronic integration.

The device – first reported in a PNAS paper in May - has the potential to meet growing demand for miniaturized batteries as sensors, wireless communication devices, personal health monitoring systems and autonomous microelectromechanical-systems (MEMS) become ubiquitous in so-called wearable technologies.

The UIUC team believes that the technology is suited to commercial production, and is also said to be in discussions with potential investors.

Team member Hailong Ning, now at Colorado-based Xerion Advanced Battery Corp, explains that the holographic process aims multiple in-phase laser beams at a photoresist, creating what he describes as a “periodically porous 3D lattice” that replicates the interference pattern of the incident beams.

"The conventional photolithography defines a set of 2D solid structures that divide the 3D lattice into an inter-digitated pattern. The combination of these two lithography processes provides comprehensive control of the electrode structure and spatial arrangement, enabling formation of flat-sided and topped 3D current collectors with independently deposited high-quality cathode and anode active materials.” 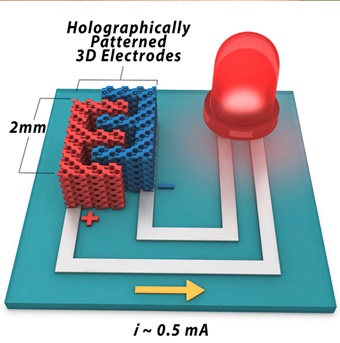 Conductive scaffold
The three-dimensional nature of the UIUC-developed battery is crucial. According to Ning, although planar thin-film micro-batteries can currently be fabricated, their typical output power per unit area is low.

And because the area available for such batteries on a chip is very limited, their energy output is often insufficient to drive MEMS and other devices.

Thicker, three-dimensional structures are needed to generate enough power to do that. However, there is usually a trade-off – Ning points out that simply increasing the battery’s thickness will also increase its internal resistance, reducing the available power.

"Here, we used a new battery design, where battery materials are uniformly deposited on a 3D conductive scaffold," he explained. “Such structures allow us to increase electrode thickness without affecting the power.”

According to Ning, all of the electrode’s important structural characteristics can be controlled easily during holographic lithography by adjusting the wavelength, intensity, polarization, angle and optical phase of the light source. He says that the approach yields “unique flexibility for customizing the energy and power for specific applications”.

Scalable power
In Ning's view, the new micro-battery offers a number of technological and operational advantages for microelectronic devices, enabling both high energy (approaching that of conventional batteries) and a power level comparable to that of supercapacitors.

"It is both highly scalable and compatible with microelectronics processing, since it uses many of the same materials and procedures common in conventional photolithography,” Ning told optics.org.

“Compared to conventional battery electrode fabrication methods [such as] slurry tape-casting, which are difficult to scale to the millimeter [scale] and below, a holographically defined micro-battery provides a viable path for creating miniaturized electrodes with high-quality active materials.”

Ning adds that the experiments and modeling work carried out by the UIUC team suggests that the energy and power of the micro-battery are strongly related to the specific structural characteristics of the electrodes, such as their size, shape, surface area, porosity, and tortuosity (i.e. their twisted nature).

"A significant strength of the method presented here is that these parameters can be easily controlled during lithography steps, which offers unique flexibility for designing next-generation, on-chip energy storage devices,” he said.

“Our fabrication method only uses photolithography and electroplating and avoids any slow, expensive vacuum deposition processes that are commonly used [to make] thin-film batteries.”

Commercialization challenges
Ning admits that a few challenges remain. Among those is the relatively cumbersome and non-standard nature of the existing optical setup. However, he is keen to stress that holographic exposures have also been demonstrated using both prism and phase-mask methods, approaches that can be performed using a standard photolithographic process. That leads him to conclude that the team’s method could become commercially viable, something that appears to be progressing.

"Braun's team is currently seeking to commercialize this technology,” Ning said. “We are actively interacting with potential investors and more detailed information will come out this fall. We believe this technology is highly suitable for a wide range of applications, such as internet of things, sensors and networks, wearable electronics, medical devices and RFID tags.”

• In a related development, scientists at Rice University have created stacked, three-dimensional supercapacitors using a different laser process. They believe that the novel energy-storage devices – based on doped graphene materials - could also find future use in portable, flexible electronics.

James Tour and colleagues demonstrated that porous, boron-doped graphene can be prepared in ambient air conditions from polyimide sheets containing boric acid, by using a laser induction process while simultaneously patterning active electrodes for use in flexible “micro-supercapacitors”.

Their ACS Nano paper, also published during May, claims that the “superb cyclability and mechanical flexibility” of the devices demonstrates their potential for future commercial use.