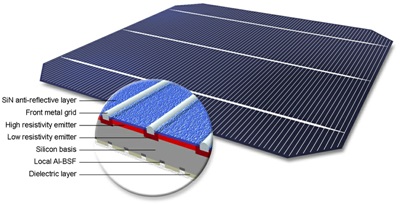 Fresh from exhibiting at the World of Photonics trade show in Munich, Germany-based laser micromachining systems firm 3D-Micromac has landed a major order from a leading maker of high-efficiency solar cells.

The Chemnitz company says that an existing customer in Asia has ordered 27 of its “microSTRUCT OTF” machines, which will be used to remove back-side passivation during PERC (passive emitter rear contact) cell production.

The deal follows what 3D-Micromac described as a “brief” qualification period, and is expected to support an annual production capacity of more than 2.5 GW of the high-efficiency cells.

It will also bring the total number of systems to be delivered to the customer to 36 units, with 3D-Micromac saying that the installation should be completed by the end of this year.

The first of the systems, which are said to be compatible with a wide range of different laser sources, was delivered to the customer in April 2014 and used to qualify the laser process at the production site.

“After successfully demonstrating process reliability, the first two production systems were ordered at the end of 2014,” announced 3D-Micromac. “Successful integration into cell production was completed recently. Further orders followed early in the year.”

PERC efficiencies
According to the analyst firm GTM Research, PERC technology increases the conversion efficiency of monocrystalline PV cells by adding a dielectric passivation layer to the rear side of the cell.

It means that whereas the ability to increase the efficiency of standard cell architectures is limited by a tendency for photo-generated electrons to recombine, the PERC cells maximize the electrical gradient across the cell’s p-n junction. That allows for a steadier flow of electrons, lower electron recombination, and a higher conversion efficiency.

However, that performance improvement must be traded against the additional cost of the PERC cell manufacturing steps, and GTM reported last year that these cells cost 50 per cent more than standard p-type multicrystalline cells.

“Due to its high price and optimized efficiency, a majority of near-term demand will likely continue to be in residential, high-ASP markets,” GTM added in an August 2014 market report. “JA Solar is launching its PERC product, PERCIUM, in the Japanese, British, Israeli, Chinese, and German markets.”

The adoption of the new laser process promises to help bring down the cost of the high-performance devices. According to 3D-Micromac, its systems can be used to produce a selective opening on backside-passivated multi- and monocrystalline solar cells.

“For this equipment 3D-Micromac guarantees an excellent price-performance ratio, but with productivity high above the average,” claims the Chemnitz firm. “This is made possible through proven on-the-fly technology, in which the laser processing takes place during the transport of the cells under the laser source. Even though the system is offered as stand-alone tool, it can also be fully integrated into existing automated production lines.”

3D-Micromac CEO Tino Petsch said in a company announcement: “We are delighted to have acquired one of the world’s biggest producers of solar cells for our production equipment.

“Already after a brief qualification phase our process know-how, customer orientation and service quality convinced them, so that we will now equip the production facilities in Asia with our laser equipment.” 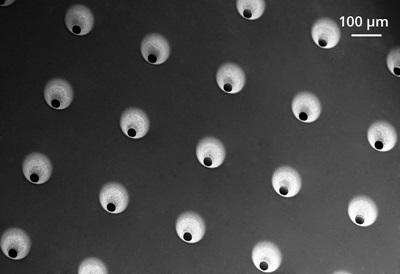 Ultrafast drilling technique
At the recent World of Photonics trade show, 3D-Micromac showed off its new focus on “innovative machine solutions” for laser micromachining with daily live demonstrations of a compact new system for what it calls “microdiagnostics”.

It sees that, along with applications in PV, semiconductor, display and glass processing, as the target markets as it updates its corporate identity.

3D-Micromac also introduced a new drilling technology based on ultrafast lasers at the Munich event, saying that it was suited perfectly to machining the latest inkjet nozzles used in printing applications.

It added: “The use of ultrashort pulse lasers guarantees a perfect entrance and exit quality, and excellent surface roughness in highly resistant nozzle materials, such as titanium, glass, stainless steel, etc.”

The new system is based on existing production tools for inkjet nozzles that have been used in industrial production for several years.