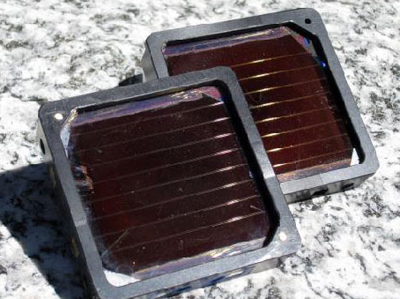 Imec simultaneously announced a new efficiency record for its large area n-type PERT crystalline silicon solar cell, now reaching 22.5% - the highest efficiency achieved for a two-side-contacted solar cell processed on 6in n-type Cz-Si wafers without the use of passivated contacts.

Considering the new perovskite photovoltaic module, imec commented, “The remarkable geometrical fill factor of more than 95% for this size of module, demonstrates the potential of scaling up this novel thin-film PV technology from cell to module level. The achievement is an important breakthrough in realizing a marketable thin-film solution for applications such as building-integrated photovoltaics.”

Tom Aernouts, R&D manager for thin-film PV at imec, said, “Not only is imec improving the perovskite material, but we are also adjusting the cell and module structure to enhance the conversion efficiency of perovskite solar cells and modules by more than 20%. The rapid progress that we are making is based on our strong background and track record in traditional organic photovoltaics.”

Imec is developing a platform for glass-based perovskite modules and collaborating with the Dutch joint thin-film PV research initiative Solliance to develop foil-based processes. With its high power conversion efficiency and stand-alone integration in building elements, both glass-based and thin-film perovskite PV technology are widely considered as important technologies for the BIPV market.

In related news, the team focused on perovskite-based PV cells, led by Kenjiro Miyano, at Japan's Global Research Center for Environment and Energy based on Nanomaterials Science (GREEN) has successfully developed perovskite solar cells with what they are calling “good reproducibility and stability as well as exhibiting ideal semiconducting properties.” Other key developers are Kohei Uosaki and Sukekatsu Ushioda, from NIMS.

A perovskite solar cell and its cross-section; schematic (left) and viewed with an SEM (right).

While conventional perovskite solar cells have demonstrated relatively high conversion efficiency, they have not been sufficiently stable, and plagued by their low reproducibility and the hysteresis in the current-voltage curves depending on the direction of the voltage sweeps. For this reason, say the Japanese team, the semiconducting properties of perovskites had not been identified: “We have successfully created reproducible and stable perovskite solar cells as follows:

• Perovskite solar cells with a simplified structure while strictly eliminating moisture and oxygen by employing the fabrication technique we previously developed for organic solar cells.

The team added that, in future studies, it expects to investigate the causes of the impurity level and its influence on solar cells. “We intend to remove the impurity level and improve the efficiency of the solar cells, thereby contributing to energy and environmental conservation.” The study was conducted at GREEN as a part of the MEXT-commissioned project, entitled “Development of environmental technology using nanotechnology.” The work has been published in Applied Physics Letters.