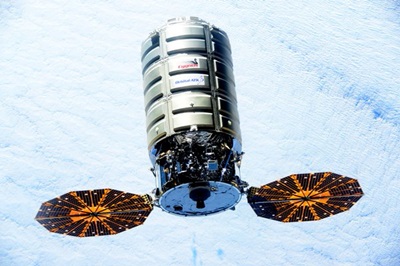 The Cygnus supply craft that docked with the International Space Station (ISS) on December 9 marked the first deployment of a new solar module design in Earth orbit.

Shortly after launching from Florida on December 6 and separating from its Atlas V rocket, the “UltraFlex” solar array – a lightweight, fan-like design developed by the US aerospace contractor Orbital ATK – unfurled (see video below).

Compared with the more familiar rigid arrays used by satellites and to power the ISS itself, the new arrays are said to be significantly lighter, and to stow more compactly – meaning more room and weight available for the cargo being transported.

“Lighter solar arrays will allow Orbital ATK to deliver more materials and supplies to the International Space Station (ISS) with each launch,” reported Orbital ATK ahead of the latest mission.

Aside from essential supplies, the latest Cygnus launch also carried an early Christmas present for the ISS crew, in the form of a set of Microsoft “HoloLens” devices. Part of NASA’s “Sidekick” project, they will use holographic optical technology to give ground operators a more realistic “virtual reality” equivalent of the view seen by the ISS crew, meaning that the ground staff can assist with tricky procedures. The kit will also help to train prospective ISS astronauts.

Missions to Mars
Manufactured in Goleta, California, the near-circular UltraFlex arrays measure 3.7 meters in diameter and provide 3.5 kilowatts of power to the Cygnus spacecraft. Mounted on a flexible membrane to support solar cells held between radial “ribs”, the design is said to increase structural efficiency and reduce the overall mass compared with an equivalent rigid panel.

The Cygnus launch is not the first time that the technology has been used by NASA, although it does mark a debut for the UltraFlex panels in an orbital re-supply mission, where there is pressure to reduce costs by carrying more cargo to the ISS in a single journey.

Similar arrays have already featured in the Mars Lander Program, and the technology will also be used by the Mars InSight mission. Orbital ATK adds that recent development work has demonstrated an enormous 30-meter diameter array that should be able to capture enough sunlight for a manned mission to Mars powered by solar electric propulsion.

Partly thanks to the UltraFlex arrays, the latest Cygnus mission has a maximum payload of more than 3,500 kg, an increase of more than 1,200 kg on its predecessor.

The apparently successful delivery should also help to revive Orbital ATK’s fortunes after it was hit by the catastrophic failure of the Antares launch vehicle from NASA’s Wallops Flight Facility in Virginia last year. It was also carrying a Cygnus supply module, with the explosion delaying missions to the ISS for a time.