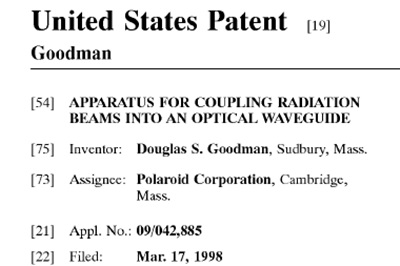 Many of the best-known companies in the laser industry have been named in a patent lawsuit launched by the hitherto-unknown company Unibeam Photonics.

The Texas-based firm, which appears to have been established within the past six months, is seeking damages from IPG Photonics, Newport and 25 other named defendants for supposedly infringing a patent filed by Polaroid back in 1998.

Other than its legal representation, little is known about Unibeam. But the fact that it has launched a lawsuit in the court of Eastern Texas – notorious as the jurisdiction of choice for so-called patent “trolls” – suggests that it is hoping that at least some of the targeted laser companies will agree to settle their cases.

Polaroid patent
The patent in question is US patent 6,075,912, entitled “Apparatus for coupling radiation beams into an optical waveguide”. Originally assigned to Polaroid, it names Douglas Goodman as inventor and was originally filed in March 1998.

It describes a way to deflect an incident beam of light into an optical fiber, said to be suitable for coupling both conventional and fiber laser sources.

The 27 complaints claim infringement of the ‘912 patent by various fiber lasers and fiber-coupled lasers sold by the defendants, with Unibeam’s representatives seeking a jury trial in each case. One of the key attractions of the Marshall courtroom for 'trolls' is its apparent preference to decide patent cases with juries – meaning a less predictable outcome.

optics.org understands that although none of those targeted feels particularly threatened by the complaint, some of the named defendants are considering a class-action defense against Unibeam.

Uri Abrams is president of laser company PD-LD, one of the defendants listed in the case. “In our industry unfortunately ‘patent trolls’ are a part of life,” he says, adding that the inventions in the patent represent very old technology.

He also explains that only complaints have been filed so far, with defense firms that appear to be in cahoots with Unibeam offering their services to the laser companies named. “They are trying to make money on both ends,” Abrams told optics.org. “Unibeam will probably try to extract a small flat fee for a license and the defense lawyers will charge for their fees. That’s what this plot looks and smells like.”

Abrams, who has volunteered to spearhead a combined defense and is encouraging those affected to contact him, added: “A class action defense would be much more effective against Unibeam instead of us all individually defending ourselves.”

Wild west or Texas east?
The Marshall Division of the US District Court for the Eastern District of Texas, a remote and largely rural part of the country, has emerged in recent years as the jurisdiction of choice for technology patent trolls in the US.

According to this 2013 article published by the technology web site ArsTechnica, that is because judges in the district are much more likely to rule that juries should decide patent issues. That dramatically raises both the cost and risk for defendants, and many take the option of an out-of-court settlement.

However spurious some of the claims might sound, examples of patent trials held in East Texas illustrate just how seriously they have been taken.

When a company called Eolas tried to demand $500 million from Google, Amazon and Yahoo for a patent that claimed ownership of the “interactive web”, the internet giants managed to win an invalidation of the patent by the jury. But as ArsTechnica also reported, that was after no less a figure than “father of the web” Tim Berners-Lee was flown to the Texan outpost to testify.

On the other hand, DDR Holdings managed to win both a jury trial and out-of-court settlements with several online travel companies for infringement of a patent acquired from the defunct company Nexchange.

Combined resources
PD-LD’s Abrams reports that although photonics companies including his own have been targeted by patent trolls before, outcomes have been favorable. “The trolls typically look to make a quick dollar and move on,” he told optics.org, pointing out that challenging the validity of the patent can be a good strategy.

“In that event you force the troll to defend and validate the inventions claimed in a patent that's not theirs,” he said. “Not being the original inventor, the troll is always in a weak position and can’t prevail in the technical argument he may not have a background in.”

Abrams adds that the combination of resources would prove a huge advantage if the case was to go any further. He said: “We’d have a much bigger defense budget where we’d have the ability to challenge the validity of patent and force the troll to run or settle very quickly for symbolic sums.”