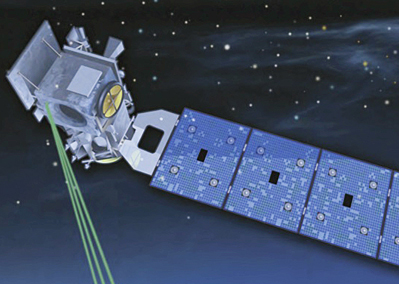 ICESat-2 will measure the height of Earth's icecaps to track melting and other changes.

Satellite-based photonic analysis of the Earth’s surface is due for a revolution in 2017, when NASA’s ICESat-2 mission will start scanning and delivering data about terrestrial ice sheets, vegetation worldwide and other conditions of our planet's surface.

Earlier this week, NASA announced that its Goddard Space Flight Center is now testing the laser system, which will be a vital component of the main scanning instrument, known as the Advanced Topographic Laser Altimeter System or ATLAS.

ATLAS is designed to send laser pulses to the Earth’s surface 300 miles below and then collect the reflected photons that return to its telescope mirror. Orientation and alignment of the system is critical for directing the photons towards the detector’s individual fiber optics – because so little of what is transmitted actually gets back to the orbiting satellite.

”It’s like keeping the point of a pin in line with the head of a pin – only it’s much smaller than that," said Jim Buchheit, ATLAS team lead for the Alignment Monitoring and Control System (AMCS), at NASA Goddard. The AMCS is the collection of optic and electronic equipment that makes sure the laser and telescope are aligned.

ATLAS will make height measurements of terrestrial features to monitor sea and land ice, forests, oceans and more. To achieve this, the instrument comprises two dozen different components. Several of these are involved in getting the beam of green light from the laser generating box, through steps that create the optimal signal size and frequency, and then split it into six beams. The Alignment Monitoring and Control System and other components will ensure that the laser beams are directed at the same spot on the ground as the receiver telescope to facilitate the collection of reflected light.

To ensure this, after the instrument has endured the violent vibration of launch, and as temperature changes can warp devices as ICESat-2 orbits in and out of the sunlight, the ATLAS engineers have built in an automatic steering mechanism for the laser. This system moves the six beams as one, to ensure the photons that bounce off Earth reach the receiver.

The receiver is ATLAS’s 1m-wide beryllium telescope. Returning photons hit the large primary mirror, which is curved to bounce them off a secondary mirror (see animated section of video below) and back into the receiver components sitting behind the telescope. The photons from the six laser beams that do return will hit six 300µm-wide optical fibers attached to the focal plane. These photons pass through filters before hitting the detectors – generating an electrical signal. 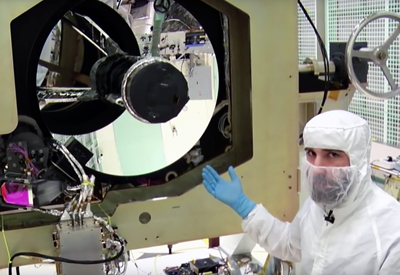 An ATLAS engineer works on the 1m-wide beryllium telescope.

There are also four optical fibers that emit LED light, which is a key part of making sure the laser beams and the telescope are aligned. On the ground, each laser beam covers a 12m-diameter footprint, which has to fit into the receiver’s corresponding 43m-diameter field of view.

These four LED lights tell the instrument where the telescope itself is pointing. They are reflected back into a camera, which is simultaneously receiving a fraction of the light from the six laser beams directed at Earth. By comparing the pattern of four LED spots from the receiver, with the pattern of six laser spots from the beams, the instrument can determine whether the two are properly aligned.

"We know what result it should be – and if it’s not that, we change the setting on the beam steering mechanism to move it," Martino said. "That’s done onboard the instrument, updating about 10 times a second."

The software aboard ATLAS is constantly checking and adjusting the steering, said Alan Gostin, AMCS algorithm design lead for ICESat-2 at Goddard. Any changes it makes are tiny – the engineers say that ATLAS could direct its laser to illuminate the head of a tack that is 100m away.

This is the first time that the Goddard center has built an automatically correcting and steering mechanism like this for flight. It was necessary for ATLAS, however, because both the receiver’s field-of-view and the laser beam diameter are significantly smaller than on previous instruments, so there is less room for the laser to drift off-target. So the AMCS team spent several weeks in November 2015 testing the steering mechanism and the software that controls it.

The Goddard team set up a system of mirrors to reflect the laser light back into the instrument, to see how the instrument responds. They intentionally moved the beam, then scanned around to see if the instrument could find it and align it to the mirror – a high-tech game of hide-and-seek. “The test rig simulates what’s going to happen in orbit," Buchheit said. "The return beam is going to move around, and the instrument has to perceive that motion."

The tests are also a rehearsal for what the team will do after the satellite launches, when they’ll run the system through a series of maneuvers to find the perfect laser aim. "The laser outputs a trillion times more light than is coming back," Gostin said. "But we can see it."

The following video, made by NASA, shows the application of the impending Icesat2 satellite, the ATLAS system and the research and development work taking place at NASA’s Goddard Research Centre‬: