System can identify chemicals in the atmosphere from a kilometer away. 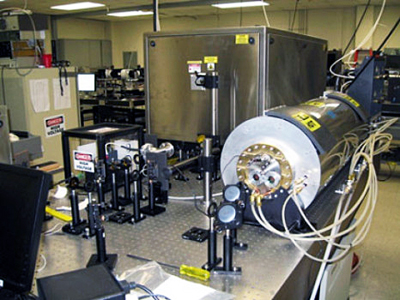 A new way to detect tiny amounts of hazardous gases.

Scientists have developed a method of detecting tiny amounts of toxic gases, such as a whiff of nerve gas, or a hint of a chemical spill, from up to one kilometer away. The new technique can discriminate one gas from another with greater specificity than most remote sensors, say the developers – even in complex mixtures of similar chemicals and under normal atmospheric conditions. The researchers at Duke University, Durham, NC, USA, say the technique could be used to test for radioactive byproducts from nuclear accidents or arms control treaty violations, for example, or for remote monitoring of smokestacks or factories for signs of air pollution or chemical weapons.

“You could imagine setting this up around the perimeter of an area where soldiers are living, as a kind of trip wire for nerve gas,” said lead author Henry Everitt, an Army scientist and adjunct professor of physics at Duke University. The technique uses a form of invisible light called terahertz radiation, or T-rays. Already used to detect tumors and screen airport passengers, T-rays fall between microwaves and infrared radiation on the electromagnetic spectrum.

Hitting a gas molecule with a terahertz beam of the roptimal energy makes the molecule switch between alternate rotational states, producing a characteristic absorption spectrum “fingerprint,” like the lines of a bar code, says Everitt.

Terahertz sensors have been used for decades to identify trace gases in the dry, low-pressure conditions of interstellar space or in controlled conditions in the lab, where they are capable of unambiguous identification and ultra-sensitive, part-per-trillion detection. Until now, efforts to use the same technique to detect trace gases under normal atmospheric conditions have failed because the pressure and water vapor in the air smears and weakens the spectral fingerprint. In a study published in Physical Review Applied, Everitt, Ohio State University physicist Frank De Lucia and colleagues describe their new approach to solving this problem.

The team’s approach works by blasting a cloud of the target gas(es) with two beams simultaneously. One is a steady terahertz beam, tuned to the specific rotational transition energy of the gas molecule they’re looking for. The second beam comes from a laser, operating in the infrared, which emits light in high-speed pulses.

At the US Army Aviation and Missile Research, Development, and Engineering Center near Huntsville, Alabama, the researchers have installed a one-of-a-kind infrared laser. Manufactured by STI Optronics, it is capable of firing dozens of pulses of infrared light a second, each of which is less than a billionth-of-a-second long.

“It’s kind of like whacking a molecule with an infrared sledgehammer,” Everitt said. Normal atmospheric pressure still blurs the chemical “bar code” produced by the blast of the terahertz beam, but the ultra-short pulses of light from the more powerful infrared laser knock the molecule out of equilibrium, causing the smeared absorption lines to flicker. We just have to tune each beam to the wavelengths that match the type of molecule we’re looking for, and if we see a change, we know it has to be that gas and nothing else,” he added.

The researchers directed the two beams onto samples of methyl fluoride, methyl chloride and methyl bromide gases in the lab to determine what combination of laser settings would be required to detect trace amounts of these gases under different weather conditions. “Terahertz waves will only propagate so far before water vapor in the air absorbs them, which means the approach works a lot better on, say, a cold winter day than a hot summer day,” said Everitt.

The researchers say they can detect trace gases from up to one kilometer away. Initially, they plan to focus on toxic industrial chemicals such as ammonia, carbon disulfide, nitric acid and sulfuric acid. Eventually, the researchers say their technique could also be useful for law enforcement in detecting toxic gases generated by illegal “crystal meth” labs, and other situations where detection at the source of the gas is not feasible.