Game-changer: the market impact of the blue LED 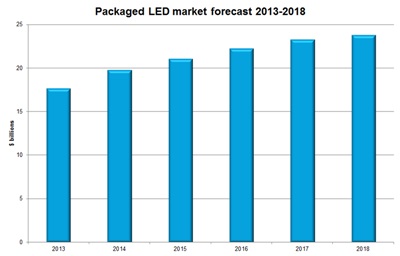 When asked whether he had envisioned the impact that his revolutionary blue LED would have in years to come, new Nobel physics laureate Shuji Nakamura’s answer was in typically modest and candid.

“No!” he replied in a hastily arranged University of California, Santa Barbara (UCSB) press conference. In fact, he wasn’t even really thinking about making a blue LED. Nakamura’s prime motivation – alongside his self-confessed “anger” towards Nichia, his Japanese employer at the time – was simply to obtain a PhD degree.

Having enjoyed a taste of the freedom that US-based researchers enjoyed during a short stint in Florida – his first trip outside Japan - Nakamura had also realized that gaining the postgraduate qualification was essential for a long and fruitful career as a researcher.

He also knew that he could get that qualification in Japan if he published five or six research papers in reputable scientific journals. And so it came to pass that an apparently maverick, lone worker in the Nichia Chemicals edifice turned the lighting world on its head.

By the early 1990s, the received wisdom was that zinc selenide semiconductor material was the only serious contender for the development of blue LEDs. Gallium nitride had been tried, but nobody could grow sufficiently large, defect-free crystals for this material to emit useful amounts of light.

Two decades on from the seminal work that built on the earlier research of co-laureates Isamu Akasaki and Hiroshi Amano, and the GaN-based blue LED has had a commercial impact that is extremely rare among Nobel-prizewinning technologies.

Market impact
According to analyst company IHS, the invention has created a market already worth $17.7 billion by the end of 2013, as well as 250,000 jobs. To indicate the rate of growth over the past decade, Strategies Unlimited had estimated the market for high-brightness LEDs (of all types) to be worth slightly less than $2 billion back in 2002.

A caveat is needed here, however. That jobs statistic is in fact a double-edged sword…the disruption to the traditional business model of lighting (essentially that bulbs expire quickly, and therefore need regular replacement) has in fact led to many thousands of jobs in bulb manufacture being lost at the likes of Philips and Osram.

Perhaps the more remarkable factor is that LED lighting revolution is still in the early stages. Will Rhodes from IHS says that LEDs will account for 32 per cent of all bulb sales and revenue in 2014.

“The LED lighting market is poised for strong growth in the next five to ten years, with energy-hungry technologies being systematically banned across the world,” the analyst firm adds.

“In particular, consumers and business owners alike are increasingly looking for energy-efficient lighting for their homes and offices to replace energy hogs such as incandescent bulbs, which can use as much as six times the amount of electricity compared to LEDs.”

One remaining question is how the LED lighting market will evolve over the coming decade, and with the co-founding of Soraa, Nakamura has put himself firmly in the “GaN-on-GaN” camp, where the light-emitting semiconductor layers are grown on a native substrate (rather than sapphire, silicon carbide, or silicon), for the very highest performance.

The possibility of setting up his own company was another strong motivating factor for Nakamura, who said in his UCSB press conference that it was still impossible to imagine doing that in Japan, where he feels that discrimination and the slavish position of the corporate “salary man” are still rife.

And right now he is still working hard, on the improvements to LED lighting efficiency and performance, using non-polar and semi-polar GaN, that were the basis for setting up Soraa in the first place.

If the venture proves successful, Nakamura could soon be scooping business awards to go with his Nobel.