As Invest in Photonics (IIP), the international convention focused on photonics business funding and partnering, prepares to open its doors this week in Bordeaux, France, Giorgio Anania, chairman of the event says its fourth edition will reflect significant change in the investment landscape.

Anania told optics.org, “The traditional venture capital world in photonics has completely died. In fact VC investment in almost any hardware area has died. The VCs are now focused on software and life sciences.”

He believes most of the hardware sectors, which were only recently investment targets, are becoming what he calls “zombie sectors” both in the USA and in Europe, although in Asia investment is continuing in hi-tech hardware.

But Anania says it is not all doom and gloom. “Luckily, the corporates have stepped in with a vengeance in the photonics world. In particular, we are seeing massive investment from the giant multinationals with their apparently infinite pockets. I’m talking about the likes of Google, Apple and Samsung. Now they don’t do the $1 million investments with the seed money, so that’s not going to happen any more.”

As evidence for his characteristic outspoken views about the ups and downs of the photonics business, Anania cited a few examples. “In May 2014, Luxvue – a developer of micro display applications - was acquired by Apple for a rumoured $1 billion. Another case was the August 2013 acquisition of Novaled by cash-rich Samsung.” 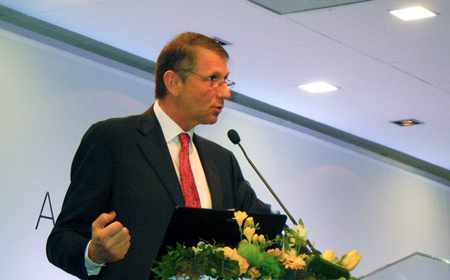 So in which photonics-related markets does Anania think there is still serious money to be made? "Photonics is ready to go into a lot of new consumer application areas and it is clearly starting to happen. In lighting for example it’s going to be a real revolution that is just starting. There are display applications – the Google Glass equivalents.

"Transportation and cars: we will keep the car’s shell but the inside it will be cluttered with all sorts of sensors with a lot of roles for photonics. In life sciences, there are developments such as non-invasive sensing. But surprisingly a lot of VCs don’t seem to know how to make it happen at the moment so they seem to be retreating in a lot of these areas.”

Anania also has some pithy advice for the VC sector which historically was so enthusiastic about photonics opportunities: "The VCs that are coming to Bordeaux or looking at this sector in general need to wake up a little bit. I will certainly be trying to wake them up in the IIP discussions. They are really missing the boat.

"Nowadays, for photonics companies that are already more advanced, the corporates are stepping in. They used to be involved at later stages of company development but now they are becoming involved at an earlier stage – but not so early that they get involved with all of the seed-funding where the VCs used to do so there is a danger of a disconnect."

There will be plenty of opportunities for potential investors to get a taste of some new photonics talent. Invest in Photonics 2014 will feature 20 emerging technology companies from around Europe, which will participate in elevator pitch-style funding sessions across the two-day conference program. The selected companies represent a pan-European group of firms, ranging from Finland, Norway, the Netherlands, Spain, Switzerland, Ireland and Hungary, as well as five companies each from Germany and France. Their objective is to improve their chances of raising a total investment of $90 million (€72m).

Thierry Thevenin, head of the organizing committee at Invest in Photonics, explained, “There are 20 exciting investment opportunities in optical communications, sensing, biophotonics, imaging, energy, healthcare and manufacturing for the VC community to consider at Invest in Photonics this year. We are confident that our emphasis on market-focused data in photonics and real life applications will help the financial community identify the best opportunities to strike deals.”