Potential applications in pharmaceuticals, security and electronics will be put to the test in £3.6 million funding round. 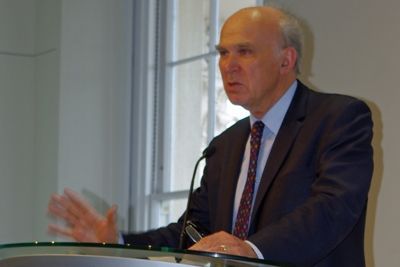 Worth £3.6 million overall, the support was announced by the UK government’s business secretary, Vince Cable, on a tour of Glasgow-based M Squared Lasers.

The money will fund a series of 18-month feasibility studies looking at the potential for new photonics techniques to be used in market sectors ranging from pharmaceuticals to electronics and security.

Cable said: “This new funding will develop research to support the UK’s growing manufacturing sector, which already employs around 2.5 million people. This early stage research will give businesses such as M Squared a great opportunity to develop new technologies to create more effective and efficient manufacturing processes.”

Manufacturing strategy
Though relatively small, the funding ties in with the government’s ongoing strategy to “rebalance” the UK’s economy more towards the manufacturing sector, and towards advanced manufacturing in particular. “We must not stand still and risk being left behind in the future,” added Cable.

The 14 photonics projects are all led by a university-based researcher, with eight of them also featuring commercial partners. Those commercial partners range from the very large – such as global powers GE Aviation and AstraZeneca – to much smaller photonics-focused companies like M Squared and ELforLight.

Among the projects are an investigation into laser-guided positioning of living cells to aid pharmaceutical testing, using novel photochemistry to transfer chemical processes from the laboratory to commercial plants, and controlling electronic forces using light patterns to assemble electronic components into circuits.

One intriguing project – involving M Squared, ELforLight and led by Robert Eason at the University of Southampton – will use lasers to create other, more powerful lasers that it is hoped will then be adopted by the UK manufacturing sector.

Working with industry "key" - Sir David Payne
David Delpy, who heads up the EPSRC, commented: “These projects demonstrate how research into the fundamental science and engineering of optical phenomena can have a significant impact in manufacturing and also shows how well the UK academic base works with industry to enable the UK to benefit from fundamental discoveries.”

Sir David Payne, director of the Optoelectronics Research Centre at Southampton, and a founder of Trumpf-owned SPI Lasers, one of the partners on a laser ultrasound project with GE Aviation and Imperial College, London, added:

“The UK remains a major manufacturing nation and this new EPSRC initiative will help us stay ahead of the competition. Photonics – where light meets electronics – is a key UK strength and these new projects demonstrate the astonishing range of innovative ideas that emerge when scientists and engineers think about manufacturing.”

“The key is to work with industry and understand the opportunity not only to improve existing manufacturing methods, but to develop entirely new ways to make things.”

• The full list of projects and their academic and commercial partners can be viewed here: