Combination of optical tweezers and holography simplifies and speeds up single cell observations.

The prototype microscopy system, developed byscientists at the Fraunhofer Institute for Production Technology (IPT), Aachen, Germany, consists of two integrated modules: the optical tweezers and the digital holographic microscope. The specific purpose of this system is to allow researchers to study cell interactions. 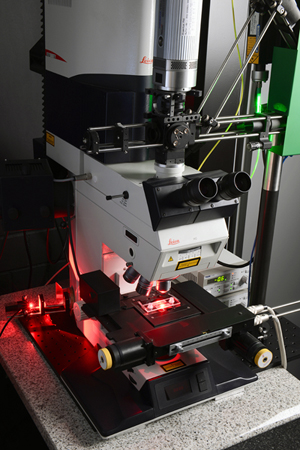 When developing new medicines, biologists and pharmacologists test different active ingredients and chemical compounds. Their aim is to find out how biological cells react to these substances. To do so, researchers often use a fluorescence microscope that produces digital, holographic images, i.e. computer-generated holograms in which the cells being studied can be viewed in three dimensions.

The hologram is first created as an optical image, which is then digitized for recording and analysis on the computer. The computer calculates the data needed to display the three-dimensional image of the cells. This method has several advantages. The researchers do not have to use markers to make the cells visible, they can examine the cells without touching them, and the cells can be characterised in vivo.

To obtain precise and reliable answers to the question of how the cells react to chemical substances, each individual cell must be placed in a tiny hollow (a "well") on a microfluidic chipl. This ensures that the cells are not influenced by the presence of other cells. Another requirement is that the cells must be of the same size, so that their reactions to the active agent can be compared. The problem is that it is difficult to transfer single cells to the tiny wells. Often, the researchers pour them in together with the nutrient solution in which they were grown.

This can have two unwanted consequences: firstly that several cells occupy the same well and secondly that the cells are of all different sizes. It can even happen that cells swim out of the wells during the test. The researchers have to take all these factors into account by employing statistical averaging but they have to carry out innumerable measurements and test large numbers of cells in order to obtain a scientifically accurate result.

The Fraunhofer IPT group dual microscopy technique offers a solution to these problems. Optical tweezers are a special instrument that uses a focused laser beam to trap and move microscopic objects such as biological cells. This tool enables the researchers to grasp selected cells, transfer them to individual wells of a microarray, and keep them trapped there.

IPT group manager Stephan Stürwald commented, “By combining these two instruments, we can save between 50 and 80 percent of the time normally needed for such work, depending on the type of cell and the test method employed. That’s mainly because we don’t have to carry out so many repeated measurements."

"The system is easy to use, and the optical tweezers can also be controlled via the touchscreen of a tablet PC. The combination of these two techniques not only simplifies current test procedures but also allows new tests to be developed. For instance, it is possible to position cells at a defined distance from one another, thus creating different patterns."

In this way, the scientists will be able to observe cell interactions, because the spacing between them is identical and consistent. One possible application already identified is the study of apoptosis, or sudden cell death. When a cell dies by apoptosis, it excretes substances that affect the behavior of neighboring cells. But within what radius?

Researchers will now be able to directly answer this question. The new system will also enable them to use the laser to selectively destroy cells that that are unsuitable for testing. A prototype of the system has already been built. It con- sists of two modules: the optical tweezers and the digital holographic microscope. The researchers have successfully carried out initial tests using the new system.