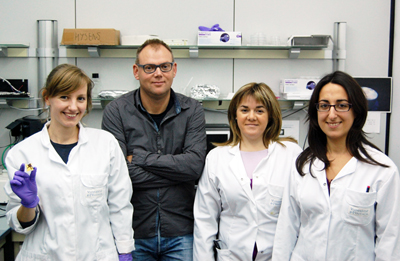 Bright and efficient: Hendrink Bolink and the ICMol team in Valenica.

Researchers at the Institut de Ciència Molecular (ICMol) of the Cientific Parc of the University of Valencia have developed a low-cost, thin film photovoltaic device with a power conversion efficiency of 12%, described as “high”.

The results of this work, done in collaboration with researchers of École Polytechnique Fédérale de Lausanne (EPFL), Switzerland, have been published in Nature Photonics.

Developed by a team led by Dr. Hendrik Bolink, the solar cell consists of a thin perovskite film sandwiched between two organic semiconductors. The total thickness of the device is less than 0.5µm. Bolink said that the hybrid organic-inorganic perovskite devices were prepared “easily and at low cost” using low-temperature processes similar to those used in the printing industry, which allows the use of plastic substrates meaning that flexible devices can be produced.

The Nature Photonics article abstract states, “Thin-film photovoltaics play an important role in the quest for clean renewable energy. The performance of perovskite-based solar cells has improved rapidly [in recent years] to reach efficiencies as high as 15%. Bolink’s group shows that certain perovskite layers, when sandwiched between two thin organic layers, can lead to solar cells with high power conversion efficiencies of 12%”. 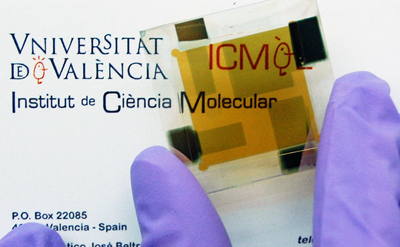 Bolink added that it will also be possible to make the device semitransparent, which means it could be integrated into building facades, for example, since the cells are very thin and lightweight. “In this way the sunlight can be filtered – not only protecting a building’s interior from intense sunlight but at the same time generating electricity.”

Therefore, says Bolink, “ICMol’s demonstration of high-efficiency in thin film solar cells made of abundantly available and cheap materials such as these perovskite-based solar cells, will allow for an increasing share of solar energy in the range of renewable resources.”