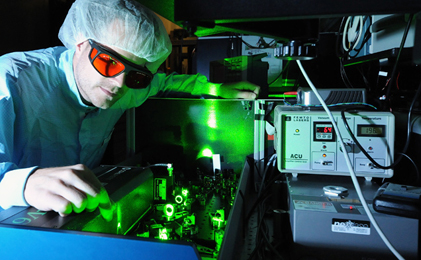 Flashy: A mode-locked laser at the Max-Planck-Institute of Quantum Optics, Munich.

A simplified detector for the measurement of the waveforms of ultrashort-pulsed laser radiation has been constructed by a team working at the Laboratory for Attosecond Physics at the Max Planck Institute of Quantum Optics, near Munich, Germany.

Team leader Prof. Ferenc Krausz says the development represents a significant step towards achieving “complete control over the waveform of pulsed laser light”. Together with colleagues based at LMU and the Technische Universität München, both in Munich, they have constructed a detector that gives a detailed picture of the waveforms of laser pulses that last for just a few femtoseconds.

Unlike conventional gas-phase detectors, this new development is made of glass, and it measures the flow of electric current between two electrodes generated when the electromagnetic field associated with a laser pulse hits the glass. The researchers can then derive the precise waveform from the induced current. Knowledge of the exact waveform enables the generation of light flashes that last only for attoseconds (10-18 s), which can be used to study ultrafast processes at the molecular and atomic levels.

The work was first published in Nature Photonics, (DOI:10.1038/nphoton.2013.348, 12 January 2014). Modern mode-locked lasers are capable of producing extremely brief light flashes that last for only a few femtoseconds .

With durations of as little as 2.5 fs, such laser pulses correspond to only one or two complete cycles of the electromagnetic field, which are preceded and followed by waves of lower amplitude that are rapidly attenuated. In laser physics it is often important to know more about the precise form of high-amplitude oscillations, because these data reveal the shape of the electromagnetic fields and allow them to probe ultrashort processes at the level of molecules and atoms.

A team led by Prof. Ferenc Krausz with doctoral student Tim Paasch-Colberg has now developed a glass-based detector that allows one to accurately determine the form of the light waves that make up an individual femtosecond pulse. In the course of experiments performed over the past several years, physicists in the group have learned that when pulsed high-intensity laser light impinges on glass, it induces measurable amounts of electric current in the material (Nature, 3 January 2013).

In order to calibrate the new glass detector, the researchers coupled their system with a conventional instrument used to measure waveforms of light. Since the energy associated with the laser pulse is sufficient to liberate bound electrons from atoms of a noble gas such as xenon, the conventional detector measures the currents caused by the motions of these free electrons.

But there is a catch: these measurements usually must be made in a high vacuum. By comparing the currents induced in the new solid-state detector with the data obtained using the conventional apparatus, the team can characterize the performance of the new glass-based set-up, so that it can now be used as a reliable phase detector for few-cycle femtosecond laser pulses.

If the precise waveform of the femtosecond laser pulse is derived, it becomes possible to reproducibly generate stable trains of ultrashort attosecond light flashes, each one a thousand times shorter than the pulse used to induce them. The composition of the attosecond flashes is in turn dependent on the exact shape of the femtosecond pulses. Attosecond flashes can be used to “photograph” the motions of electrons in atoms or molecules. In order to obtain high-resolution images, the length of the flashes must be tuned to take account of the material one wants to investigate.

Krausz and his team say that highly sensitive and reliable measurements of physical processes at the level of the micro-cosmos with the aid of single attosecond light flashes of known shape should become easier to perform because, thanks to the new glass-based phase detector, the source of the energy to drive them – the waveform of the laser pulses – can now be controlled much more easily than before.