IMEC-led work is among more than a dozen optics-related projects to receive European Research Council backing. 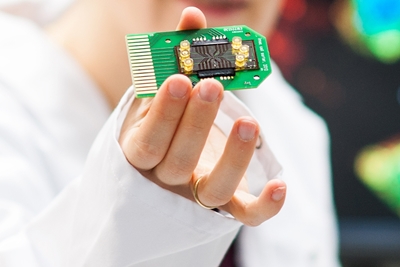 A new lens-free imaging system for detecting the spread of dangerous “metastatic” cancer cells is among several optics and photonics projects to receive new funding via the European Research Council (ERC).

Backed through the ERC’s “consolidator grant” program for leading researchers at the mid-career point, the Single Cell AnaLysis and Sorting Platform based on Lensfree digital imaging applied to Rapid Cancer Detection (SCALPEL) project is led by Liesbet Lagae from the Belgium microelectronics research center IMEC.

It is set to receive €2 million over a five-year duration. The team led by Lagae, who is R&D Manager for life science technologies at IMEC and also a professor in at nearby KU Leuven, will develop a device designed to help pathologists, surgeons and nurses to improve individualized follow-up and survival rate of cancer patients.

Single-cell analyzer
They are working on a single-cell analyzer based on lens-free digital imaging. It will be used to observe the physical morphology of single cells flowing through a microfluidic network, with gentle cell-sorting switches to route the cells towards different outlets.

According to IMEC, it would therefore combine the virtues of so-called “high content” microscopic imaging with those of automated high-throughput technologies - at a fraction of the normal cost.

“Because all optomechanical components, such as lenses, detectors, and nozzles, are replaced by nanoelectronics and advanced signal processing technology, the devices will be cheap and compact,” IMEC said.

Targeting metastasis
In particular, it will be used to look for metastatic cancer cells – ones that travel through a patient’s blood stream from the site of a primary tumor, spreading the disease and having a huge impact on a patient’s chances of survival.

IMEC says that while billions of dollars have been spent trying to cure primary tumors, very little in comparison has been done to detect or kill the circulating tumor cells that cause metastasis.

During the project, Lagae will collaborate with Deniz Wirtz from John’s Hopkins INBT and Johan Swinnen from KU Leuven’s department of oncology, with the aim of showing the potential of the device in metastasis detection.

Of those, at least a dozen will involve some form of optics and photonics element, including a project on optical clocks at CNRS in France, and another on optogenetics at the University of Bonn.

Aside from SCALPEL, The optics-related projects receiving ERC backing through the “consolidator” grant program include: