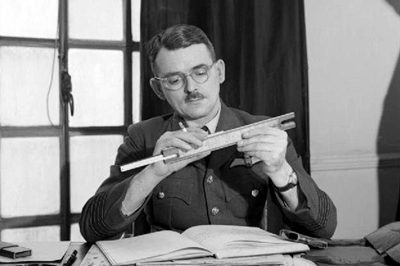 Professor Lin Li, director of the Laser Processing Research Centre (LPRC) at the University of Manchester in the UK, has won the Royal Academy of Engineering (RAE) Sir Frank Whittle Medal, recognizing his achievements for engineering innovation in manufacturing.

Li is set to receive the award at the RAE’s annual awards dinner, which is being held July 17 at London’s Battersea Power Station, where special guests including HRH The Princess Royal and Chancellor George Osborne will be in attendance.

Named after one of the UK's most influential and highly regarded engineers (pictured above in 1943), famed for his invention of the jet engine, the RAE’s Sir Frank Whittle Medal is awarded to an engineer for outstanding and sustained achievements.

Each year, the specific field of activity changes, and this year the medal is being awarded for engineering innovations in manufacturing. Previous winners have included the world wide web pioneer Tim Berners-Lee and Arup's Mike Glover, who oversaw the design and construction of the high-speed railway link connecting central London with the Channel Tunnel.

Also the head of Manchester’s manufacturing research group, Li is recognized as a pioneer in laser and materials processing technologies across several industrial sectors and myriad applications.

Industrial collaboration
Examples of industrial collaborations include work with Rolls-Royce and BAE Systems, in which Li and his team have developed a laser cleaning technique that is now used by the aerospace industry in place of conventional chemical cleaning, yielding reduced scrap rates and environmental impact.

Li and colleagues are also credited with inventing a technique known as 'laser scabbling', which is now being commercialized to assist with nuclear power plant decommissioning.

In the technique, a laser is used to separate highly contaminated surface concrete in a nuclear installation from the bulk concrete structure, so that the remaining bulk concrete can be treated as low-level nuclear waste, dramatically reducing the decontamination process and cost.

Other applications in the automotive sector now include techniques based on Li’s research of non-conventional beam geometry for materials processing, for example in laser joining of car roofs.

In 1994, he moved to what was then known as the University of Manchester Institute of Science and Technology (UMIST), and set up the institution’s first high-power laser processing research laboratory, followed by the establishment of the LPRC in 2000.

Li doesn’t just work on lasers and advanced manufacturing techniques. He and his research team have also discovered a way to increase the resolution of an optical microscope by up to four times beyond the conventional theoretical optical resolution limit, thanks to the magnifying and special optical effects of “microsphere” lenses.

The technology means that it is possible to see 50 nm structures without having to resort to a more complex electron microscope, allowing scientists to study viruses and their interactions with cells and drugs in real time.