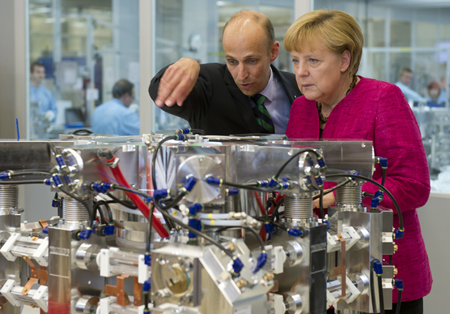 German Chancellor Angela Merkel visited the machine tool and laser specialist Trumpf, Ditzingen, Germany on July 2, to learn more about “the situation of family-owned companies in the high-tech sector”. Merkel was given a tour of the premises, and exchanged views with management and employees.

During her tour, Merkel, a qualified physicist, watched CO2 lasers and combined punch-laser machines being assembled, and she also visited Trumpf’s Machine Tool Show Room. The company, which was founded in 1923, claims to be the world market leader for machine tools for sheet metal processing as well as for industrial lasers and laser systems.

Trumpf invests between 8 and 10 per cent of its annual revenues into research and development. "This high expenditure and investment is necessary for us to maintain our technological lead over our competitors worldwide," said the company’s President Nicola Leibinger-Kammüller. In a direct political request to Germany’s leader, she added, "There must never be a taxation system that takes away capital on a large scale from family-owned companies like ours – that would be disastrous not only for us but also for Germany as an industrial location.” 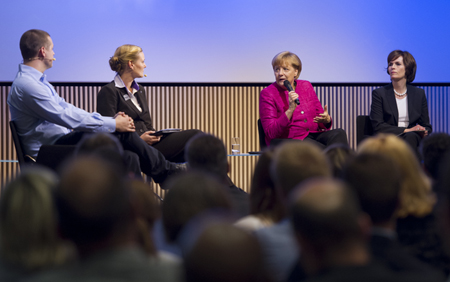 Merkel underlined the importance of family companies such as Trumpf.

Leibinger-Kammüller also reminded Chancellor Merkel during the visit to continue strengthening the competitiveness of German exporters, saying, "We need safe energy at prices that do not place us at a disadvantage in international competition. We need the best possible infrastructure – for traffic as well as data networks. Where all these topics are concerned, there is an urgent need for action in the next parliamentary term."

The Chancellor underlined the importance of family companies as "the backbone of the German economy", saying that it was the combination of high technology and a responsible approach that made German medium-sized enterprises such a model for success.

Discussions held subsequently with Trumpf employees centered on the sovereign debt crisis in the Eurozone and its impact on German exporters, as well as on the training and further qualification of the younger generation and its prospects for the future. Merkel also exchanged views with the CEOs of several select Mittelstand companies from Baden-Württemberg.

Merkel, who is also leader of Germany’s center-right Christian Democratic Union party, condemned data snooping by the US NSA. While talking to Trumpf employees she said that industry required dependable framework conditions – and this also meant “there [should be] no spying, no matter on whose behalf. Companies must be able to protect their knowhow and intellectual property."

“In the age of the internet, the right balance must to be found between security from terror threats and freedom,“ the Chancellor explained. This was both true for industry and individuals. She told the gathering that, “This is the Government’s responsibility”. The topic would also play "a considerable role in the discussions on the transatlantic trade agreement with the US.“