IMAX to open 35 theaters in China and Korea 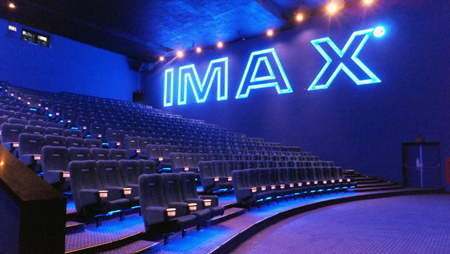 IMAX Corp. and CJ CGV Holdings, which owns the largest multiplex cinema chain in South Korea, have announced an expansion of the companies' partnership with the addition of 35 new IMAX theaters.

The deal includes 30 theaters to be installed in new construction projects across China as well as five previously optional theatres in Korea, now confirmed, which are subject to final documentation. Today's agreement brings CJ CGV's IMAX commitment to 95 theaters, with 20 in South Korea and 75 in China, making it IMAX's largest exhibitor partner in Asia.

Richard Gelfond, IMAX CEO, commented, "As our largest deal to date with CJ CGV, this agreement reflects the momentum that continues to build for IMAX internationally. We're excited to build on our successful partnership with such a substantial commitment."

Seo Jung, CEO of CJ CGV, added, "With today's agreement, we are building on our success with IMAX, which continues to generate incremental attendance and revenue to our movie complexes. We are delighted to expand our IMAX network as it is a key strategy to supporting our growth across Asia Pacific, which has shown strong demand for IMAX's immersive experience."

Today, IMAX has 133 theaters open and a 117 theater "backlog" across China. Since 2010, the company has released 10 local-language films in the country, with three thus far in 2013 and four planned for the remainder of the year.

CJ CGV has also agreed to install IMAX's next-generation laser digital projection system in a theatre located in a major metropolitan area within South Korea by the end of 2015, subject to final documentation. The system, which represents the culmination of the largest R&D initiative in IMAX's history, incorporates the laser digital intellectual property IMAX exclusively licensed from Eastman Kodak and Barco's unique laser innovations.

IMAX said that the laser projector is expected to "set a new benchmark as the industry's premium entertainment experience" and that it will enable IMAX's largest screens to deliver the highest-quality digital content available with greater brightness and clarity, a wider color gamut and deeper blacks.

CJ CGV HOLDINGS is a wholly owned subsidiary of CJ CGV, and is incorporated under the laws of Hong Kong. CJ CGV HOLDINGS was established by CJ CGV specifically to oversee the expansion of theater business throughout Greater China. CJ CGV operates South Korea's largest multiplex cinema chain, with its headquarters in Seoul.

Since the opening of its first cinema in eastern Seoul, CGV has expanded and currently operates 816 screens over 103 sites across South Korea. CGV opened its first overseas branch in Shanghai, China in late 2006, its first North American branch in Los Angeles, California, in June 2010 and acquired Megastar, Vietnam's largest multiplex cinema chain in July 2011. CGV now has 50% of the market share in South Korea.

IMAX combines proprietary software, architecture and equipment to create cinematic experiences that "take viewers beyond the edge of their seat to a world they've never imagined". The company claims that leading filmmakers and studios are utilizing IMAX theatres to connect with audiences "in extraordinary ways". Consequently, IMAX's network is considered to be among the most important distribution platforms for major films.