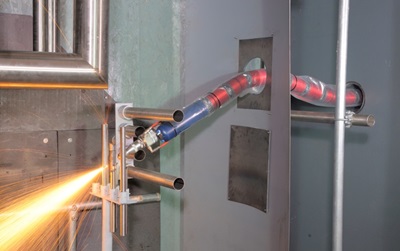 The second phase of “LaserSnake”, a UK project working to develop high-powered laser cutting systems and robots for remote nuclear decommissioning, is under way.

The aim of the new three-year effort, which has a total budget of £7.7 million, will be to produce larger versions of so-called “snake-arm” robots, equipped with high-power fiber lasers to cut and treat contaminated materials.

According to project partner TWI, “LaserSnake2” follows on from a successful feasibility study carried out in partnership with Bristol-based OC Robotics and the UK’s Technology Strategy Board (TSB), in which prototype equipment was developed.

This second phase sees the team extended to also include ULO Optics, Laser Optical Engineering and the National Nuclear Laboratory, who will collaborate to make the new technology suitable for industrial deployment.

The project is to receive grants of £5.8 million from a combination of the TSB, the UK’s Department of Energy and Climate Change (DECC), the Engineering and Physical Sciences Research Council (EPSRC) and the Nuclear Decommissioning Agency (NDA).

“LaserSnake2 will address the issue by conducting research with two types of robot – one for open access spaces and one for confined spaces,” the manufacturing technology organization said. “The approach has the potential to increase safety and reduce decommissioning timescales and costs.”

More specifically, the objectives of LaserSnake2 are to:

• develop long-reach, snake-arm robots for hazardous and confined spaces, in air and underwater;
• develop laser cutting optics for safe, remote cutting in air and water – focusing on nuclear decommissioning;
• consider the regulatory and certification issues associated with tele-operated delivery of laser cutting solutions for the nuclear industry;
• combine snake-arms and mobile robots to create a mobile platform for exploration of complex spaces.

Thus far, the team has used a 5 kW fiber laser. Configuring it in two different ways, TWI and OC Robotics have shown that both tube cutting for size reduction and a technique known as “concrete scabbling”, for removal of contaminated surface layers, can be conducted in a safe, remote and efficient manner.

According to the team, for concrete with a limestone aggregate, a 5kW laser will remove a square metre of surface to a minimum depth of 10mm in less than two hours.

Coverage can be increased by either reducing the depth of removal or by increasing the laser power. “For other types of aggregate, which show less reaction to the laser than limestone, scabbling is not as effective and further work is required to optimise performance,” TWI reported after the first phase of the project.

“A very effective and efficient system for cutting of stainless steel pipes and other fixtures/fittings has been developed,” it added. “The cutting head is both lightweight and has a significant stand-off tolerance and so is relatively simple to deploy and operate remotely.”

TWI says that LaserSnake2 will be demonstrated in 2015 at its site near Cambridge, and then “on the road” at a number of nuclear facilities. OC Robotics points out that the technology has plenty of potential outside of the nuclear sector, for example in the oil and gas industry or construction.

“The success of the project will be measured both in terms of progress made towards developing a tool kit for the nuclear sector, and also the exploration of non-nuclear markets,” it says.