Los Alamos researchers show that laser-neutrons are a useful tool against nuclear smugglers. 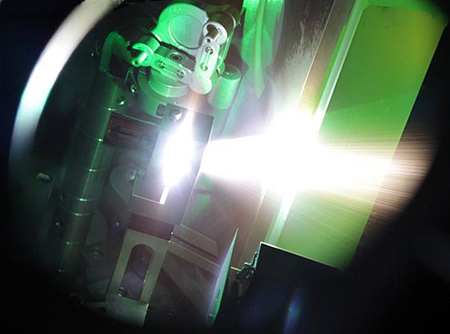 Researchers at Los Alamos National Laboratory, NM, USA, have successfully demonstrated for the first time that laser-generated neutrons can be employed as a useful tool against would-be smugglers of nuclear material.

The international research team in February 2013 used the short-pulse laser at Los Alamos’s Los Alamos National Laboratory facility to generate a neutron beam with novel characteristics that interrogated a closed container to confirm the presence and quantity of nuclear material inside.

The successful experiment paves the way for creation of a table-top-sized or truck-mounted neutron generator that could be installed at strategic locations worldwide to thwart smugglers trafficking in nuclear materials.

“We have demonstrated for the first time a novel approach for generating a record number of neutrons driven by a laser directed into a beam over a very small area that could provide proof positive of a large variety of nuclear items,” said Los Alamos physicist Andrea Favalli, an Italian researcher who led the February experiment.

The researchers focused an extremely short and intense laser pulse onto an thin foil of deuterated plastic, a material in which hydrogen atoms within the foil are replaced by deuterium isotopes. When the powerful laser burst hits the foil target, it transfers much of its energy into the deuterium nuclei — accelerating those particles into a beam traveling at about one-tenth of the speed of light into a second metal target. When the fast-moving deuterons hit the secondary target, they create a “blizzard” of very fast-moving neutrons in a cone with an angle of about 30 degrees.

The Los Alamos team say that the Trident laser is so good at producing neutrons that it has shattered the previous world record number of neutrons in a laser-generated beam, and driven the neutrons to an energy above 150 MeV, or more than ten times the energy of neutrons from D-T fusion as produced in devices such as the National Ignition Facility at Lawrence Livermore National Laboratory, Livermore, CA, USA. 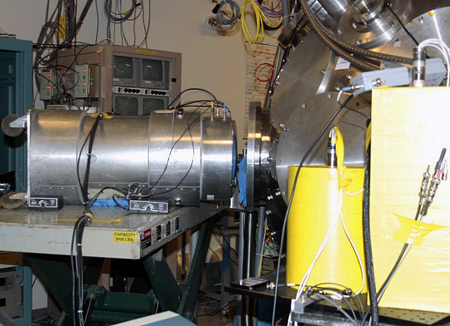 “This is something that has never been demonstrated before,” Favalli said. “Up until this experiment, nuclear material detection with a single laser-generated neutron pulse was merely an idea. Our team invented the concept, fabricated all the materials necessary for the experiment, and confirmed our results within three weeks from start to finish.”

Detecting nuclear material by active interrogation has been somewhat impractical up until now because doing so would require a giant, stationary facility or long measurement times with less powerful neutron generators. The researchers say the Trident experiment shows promise for the development of a small, portable neutron interrogator that could be used at border crossings, for example.

Andreas Favalli and Martyn Swinhoe of the Safeguards Science and Technology Group at Los Alamos led the research activities. The team was composed of scientists and postdoctoral researchers from several Los Alamos divisions, as well as M. Roth from the Technical University of Darmstadt. Los Alamos National Laboratory is patenting the process.