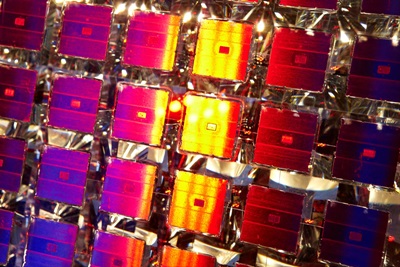 A 1 MW pilot concentrating photovoltaics (CPV) system designed by semiconductor materials firm Soitec is set to be built in Saudi Arabia, in partnership with the world’s largest oil producer.

CPV has long been considered a potential source of reliable solar electricity in the Middle East, although only relatively small facilities have been constructed thus far.

The Saudi Arabian investment company Khaled Juffali Company (KJC) and the Saudi Arabian Oil Company (Saudi Aramco – the petrochemicals giant owned by the Kingdom of Saudi Arabia), are behind the plan to build the pilot CPV facility in the country’s northwestern Tabuk region.

The project represents the first piece of business agreed by KJC and Soitec since the two companies signed a joint agreement in April to drive the deployment of solar power in Saudi Arabia and the wider Middle East.

Sunny skies
As well as representing the world’s richest source of petrochemicals, the Middle East is also an excellent location for CPV energy generation, which requires reliably clear skies and sunshine, and performs better than conventional PV technology in hot climates.

Saudi Aramco says that it has two key objectives for the 1 MW project: first to complete the work on schedule; and second to test the performance of CPV technology and assess its levelized cost of energy (LCOE) for potential future utility-scale installations.

Proponents of CPV have long believed that its LCOE – essentially a long-term measure of a power plant’s cost-effectiveness – would give the technology a major advantage over conventional PV, provided that a location is sufficiently sunny.

But detractors have similarly claimed that the additional complexities of CPV, which relies on much more expensive multi-junction cells and high-precision multi-axis trackers than standard PV, would prove insurmountable for widespread adoption – and that deployment in desert conditions such as the Saudi peninsula would prove problematic.

Groundwork
Gaetan Borgers, executive vice president of Soitec’s solar division, said in a statement: “We have made dedicated efforts in recent months to position ourselves in Saudi Arabia and to bring to the country a strong offering. We are very proud to have been selected in this first CPV tender and we look forward to a fruitful cooperation with Aramco.”

Sheik Khaled Juffali, the founder and chairman of KJC, said that the project with Soitec would lay the groundwork for further deployments as Saudi Arabia looks to develop a solar-energy market, despite its huge oil wealth.

“This is a major breakthrough in the solar market and a great testimony to the ability of Soitec’s highly performing solar technology to deliver the highest competitive advantage under desert conditions,” Juffali added.

Utility company Belectric, which has already connected more than a gigawatt of utility-scale solar power to grids around the world – including at Saudi Aramco’s headquarters - will actually construct the plant, via its Saudi Arabian subsidiary.

Soitec’s particular take on CPV technology is based on decades of research at the Fraunhofer Institute for Solar Energy Systems (ISE) in Freiburg, Germany, using Fresnel lenses to concentrate sunlight by a factor of 500 onto high-efficiency compound semiconductor cells.

Earlier this year Soitec installed a CPV demonstration system at the Medina College of Technology’s (MCT) campus in Medina, Saudi Arabia, and the company says that this installation has served as a platform for applied research and training projects on solar energy in the Middle East - as well as CPV performance in sunny, hot and arid conditions.

Soitec said last month that it had developed a quadruple-junction solar cell with a conversion efficiency of 43.6% - seen as a key step en route to a 50%-efficient cell that would dramatically improve the LCOE of CPV systems.

However, the cost of pursuing a business strategy in the solar sector has become apparent in the company's recent financial releases. In November, the France-headquartered company said that its solar division made a €40 million operating loss in the first half of fiscal 2013.

• Soitec's US division is to work with Maxwell Technologies on a California Energy Commission funded, two-phase program to demonstrate the cost and efficiency benefits of combining an energy storage system with Soitec’s CPV technology.

Maxwell has been awarded a $1.39 million contract to fund design and integration of an ultracapacitor-based energy storage system with Soitec’s CPV system located on the campus of UC San Diego and a second commercial-scale system at Soitec’s solar power plant in Southern California.

The integrated systems will also take advantage of other technology advances, including solar forecasting and predictive energy control, and will run through November 2015.