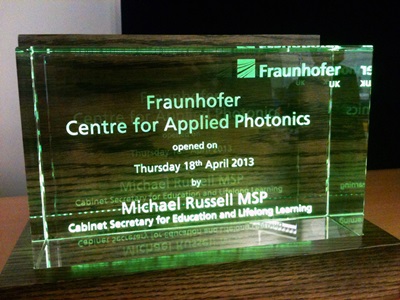 Up and running: Fraunhofer UK

Glasgow-based M Squared Lasers has become one of the first companies to partner with the Fraunhofer Center for Applied Photonics (F-CAP), the new technology hub now based in the same Scottish city.

The collaboration centers on a project co-funded by the UK’s Technology Strategy Board (TSB). Called “Synoposis”, it will use M Squared’s tunable infrared sources to detect potentially hazardous gases being emitted by landfill sites, industrial plants and chemical processes.

The broadly tunable light sources developed by M Squared will increase the range of contaminants that can be detected spectroscopically, by operating over a much broader range of infrared wavelengths across the infrared spectrum than current technologies.

M Squared chief executive Graeme Malcolm, who spoke at the Glasgow launch of the F-CAP laboratories last month, said in a statement: “This partnership is a great example of how academia and industry can work together to provide technology which has real-world benefit.”

“At the moment, scanning for these substances is a bit like having only one radio station tuned into your stereo – we need to find what else is out there and that means increasing the range of frequencies we are able to scan.”

“We hope this research will ultimately yield the kind of laser technology which can provide fast, accurate and reliable data about waste gas emissions to improve environmental and commercial performance.”

While the TSB is providing some of the funding for the development project, the Fraunhofer partnership provides the company with access to additional resources and research capabilities that the M Squared says would otherwise require significant additional investment.

Malcolm added: “Partnering with an organisation like Fraunhofer makes perfect sense for us. It enables us to access a range of additional skills without the requirement for major investment, and de-risks major research projects which could ultimately lead to products we can take to market.”

Vince Cable attends London F-CAP launch
F-CAP and its parent organization Fraunhofer UK Research were the subject of another launch event in London on May 23, with the UK government’s Business Secretary Vince Cable - who studied for his doctorate at Glasgow University - in attendance.

Cable, who is aiming to rebalance the UK economy towards export-led manufacturing, said of the partnership with the German organization: “The UK produces some of the most pioneering scientific research in the world but we need to ensure our best ideas are developed to a stage where they can be easily adopted by business, generating the commercial success that fuels growth.” 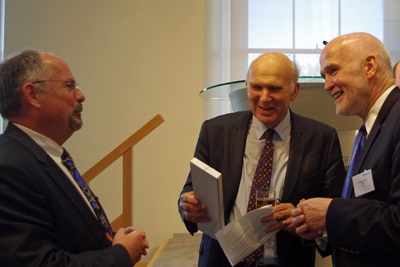 Vince Cable gets an SPIE tie

“Fraunhofer has a proven track record in bringing new ideas and technologies to market across the world. Alongside the Technology Strategy Board’s Catapult centres, Fraunhofer UK will make a valuable contribution to the innovation landscape across the UK.”

Photonics had initially been short-listed to become a “Catapult” technology and innovation center, but was not ultimately selected as one of the initial recipients. However, the F-CAP hub is expected to perform a very similar function.

Tim Holt, the executive director of Fraunhofer UK Research and formerly a sales manager at laser company Rofin-Sinar, said of the M Squared project, one of the first in which F-CAP will be involved: “It is an exciting start and a perfect example of how we will work with companies seeking to innovate their products and processes.”

Smarter innovation
Speaking at the London launch, held at the Royal Academy of Engineering, Holt echoed Cable’s sentiments. “It is imperative that the UK innovates more and that we are smarter, and swifter, at generating business success from university research,” he said. “Sitting at the interface between universities and industry, Fraunhofer will help the UK create a powerful innovation system from blue-skies research to applied research and development and from prototyping and small-scale production to full-scale manufacturing.”

Aside from M Squared’s “Synoposis” effort, projects set to be undertaken at F-CAP include the development of lasers for high-resolution, deep-tissue medical imaging systems to be used in neuroscience and cancer research. Another will look to optimize the position and efficiency of wind turbines using laser-based technology.

Ulrich Buller, a senior vice president at Fraunhofer Gesellschaft in Germany and also a director of the UK wing, stressed that it would not just be Scottish companies to benefit from the F-CAP resources:

“Our aim is that a Fraunhofer Institute partnered with an excellent university, operating according to the proven Fraunhofer model, provides first class applied research to the regional, national and international markets,” he said. “The new Fraunhofer Centre for Applied Photonics in Glasgow will be able to reach out to companies across the UK.”