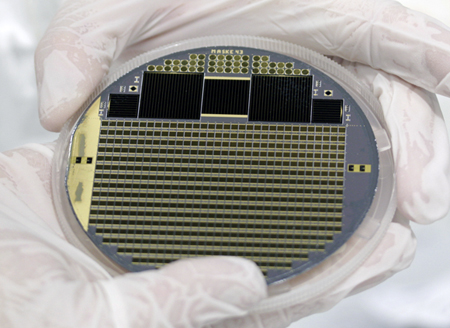 In an ambitious industry project with the French company Soitec, Fraunhofer ISE, Freiburg, Germany, is developing a new generation of multi-junction solar cells with efficiency potential as high as 50 % under "concentrated sunlight" [see definition below]. To achieve this, the researchers are replacing the conventional triple-junction solar cell – which consists of semiconductors from groups III and V of the periodic system – by a new four-junction device.

Two dual-junction cell structures are first grown on separate III-V compound semiconductor substrates and then fused together so efficiently that the interface promotes the current flow through the four-junction solar cell device. Multi-junction solar cells are used in so-called concentrator PV power plants.

Dr. Frank Dimroth, Department, Head of III-V Epitaxy and Solar Cells at Fraunhofer ISE, comments, “We are very pleased about the success of a 43.6 % cell which we were able to reach due to the wafer bonding technology. For the first time, we can combine the best III-V compound materials in one solar cell device. This leads us into a new generation of multi-junction solar cells showing outstanding efficiency potential.”

“Now we are able to combine lattice mismatched crystals which with conventional technology cannot be grown on top of each other without deteriorating material quality.” Wafer bonding refers to a technology where two different semiconductor crystals are brought into close contact to each other and compressed to form covalent bonds at the interface," Dimroth added.

This technology is a key expertise of the French company Soitec and the development partner CEA-Leti. It has been used for many years in manufacturing engineered substrates for the microelectronics industry. Soitec and CEA-Leti have been successful together in adapting these processes to meet the specific requirements of solar cells. These are mechanical stability, optical transparency and electrical conductivity of the bond interface.

At Fraunhofer ISE, more than 30 individual semiconductor layers had to be engineered and optimized for the new four-junction solar cell. Part of the cell structure was developed at the Helmholtz Zentrum Berlin in the research group of Prof. Thomas Hannappel, (now with Technical University Ilmenau) and transferred to Fraunhofer ISE where it was integrated into the epitaxy process. 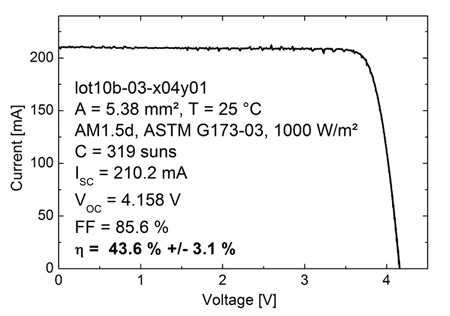 The result of this French-German collaboration is a four-junction solar cell device with an outstanding efficiency of 43.6 % at a concentration level of 319 suns. The efficiency remains above 43 % in a concentration range of 250-500 suns.

It is the first time that such a high efficiency is obtained for a solar cell with four pn-junctions in series. The further development of this new four-junction solar cell offers the opportunity to improve conversion efficiencies even further to 50 % in the future.

The application for these high efficiency multi-junction solar cells is primarily in photovoltaic concentrator modules from Soitec. In 2009, the company acquired the former Concentrix Solar GmbH, a spin-off from Fraunhofer ISE. Since then, Fraunhofer ISE continues to support Soitec in the development of high efficiency solar cells and point-focus concentrator PV modules. This technology is used worldwide in solar power plants in regions with high solar irradiance.

The French-German cooperation between Fraunhofer ISE, CEA-Leti and Soitec started with the Fraunhofer-Carnot project “SolarBond”, funded by the French Agence Nationale de la Recherche ANR and the German Ministry of Research BMBF between 2009 and 2011.

In this project, the partners demonstrated for the first time the successful transfer of ultra-thin solar cell layer structures and the application of re-usable engineered substrates. This was an important milestone on the way to a commercialization of the new four-junction solar cell. The achievements were honored by the Franco-German Business Award in 2011.