New method of producing "coherent matter" beams promises laser that would use one hundredth the power of conventional lasers. 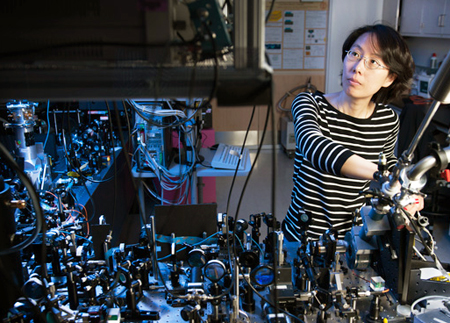 Na Young Kim is part of the Stanford team that has demonstrated a polariton laser.

Physicists at Stanford University, CA, USA, have developed a new method of producing "coherent matter" beams. The new laser system would use one hundredth the power of conventional lasers and could one day be used in applications from consumer goods to quantum computers, say the team.

An international research team led by Stanford's Yoshihisa Yamamoto, a professor of electrical engineering and of applied physics, has demonstrated what he calls a "revolutionary" electrically-driven polariton laser that could significantly improve the efficiency of lasers.

The system makes use of the special physical properties of bosons - subatomic particles that scientists have attempted to incorporate into lasers for decades. "We've solidified our physical understanding, and now it's time we think about how to put these lasers into practice," said physicist Na Young Kim, a member of the Stanford team. "This is an exciting era to imagine how this new physics can lead to novel engineering."

The work is detailed in the May 16 issue of Nature, and was conducted in collaboration with the National Institute of Informatics in Tokyo, Japan, and a team from the University of Würzburg in Germany, led by physicist Alfred Forchel.

All lasers are based on Einstein's principle of stimulated emission. The "conventional" laser process, however, is relatively inefficient. There is a hard limit to the number of electrons that can inhabit a given energy level at any given time, and conventional lasers waste energy unnecessarily exciting electrons to higher energy levels even when the lower levels are too full to accept the excited electrons when they fall.

Kim's polariton laser pairs electrons with holes to form an exciton. Excitons are bosons, and an unlimited number of them can inhabit any given energy level. Using bosons in lasers has been a scientific goal for decades, but Yamamoto's team is the first to successfully build an electrically-driven laser using bosons. The result was recently reproduced and confirmed by scientists at the University of Michigan, who published their work in the journal Physical Review Letters (DOI: 10.1103/PhysRevLett.110.206403).

This change drastically reduces the amount of power required to run the laser. The current iteration of the polariton laser requires two to five times less energy than a comparable conventional laser, but could require 100 times less energy in the future. Kim commented, "The outcome would look similar to that of the traditional photon lasers, but the physical mechanisms inside are very different".

One benefit of the electrically driven polariton laser is that it only needs to be attached to a power supply to emit photons, allowing it to be easily integrated with existing semiconductor chips in the future.

The current polariton laser operates only at 4 Kelvin and requires constant cooling by liquid helium to prevent the excitons inside the gallium arsenide semiconductors from being pulled apart by thermal energy. The Stanford team hopes switching to a material that requires more energy to break apart excitons will enable them to build polariton lasers that work at room temperature - which will be an important step toward widespread use.

"We're hoping we can replace conventional semiconductor lasers with these polariton lasers in the future," Kim said. "There are a lot of hurdles in the way, but we aim to bring novel devices built on sound physical understanding for cost-effectiveness and efficient power consumption."

The polariton laser is already being utilized by Stanford researchers developing quantum computers and quantum simulators. Kim believes similar lasers will be available to those outside the scientific community within the next five to 10 years.

The research was supported by the National Science Foundation, the DARPA QUEST program, the Japan Society for the Promotion of Science through its "Funding Program for World-Leading Innovation R&D on Science and Technology (FIRST Program) and the State of Bavaria.