Scientists at Laser Zentrum Hannover (LZH) have filed a patent application for a new optical imaging technique that they says holds great promise in medicine and biology.

Scanning laser optical tomography (SLOT), which LZH describes as the optical equivalent of the computed tomography (CT) scan, generates images with the same resolution in all three spatial planes.

Capable of simultaneously recording transmitted, scattered and fluorescent light, LZH claims that SLOT can quickly generate three-dimensional images with a resolution better than one-thousandth of the target object's size.

The goal of LZH’s current project is to speed up image generation to around 20 seconds for 600 individual projections, in order to make the technology more practically useful.

“SLOT has several advantages over optical projection tomography,” explains the laser applications research center. These include homogeneous lighting and a high signal-to-noise ratio, coupled with the avoidance of ring artefacts and speckle.

The technique can be also be used in conjunction with multiple optical contrast phenomena, such as absorption, scattering and fluorescence mechanisms.

Industrial development
Though still at an early stage, among those to be working on the new imaging process include industrial research partners, as well as the local University of Veterinary Medicine and the Hannover Medical School.

Using intrinsic optical contrast processes, such as absorption, LZH says that it is possible to generate high-resolution ex vivo volumetric images of large samples, for example locust heads or mouse lungs. Using absorption and auto-fluorescent imaging, researchers at the center are also said to have generated images of lung structures showing resolution of individual alveolae.

Other projects have shown the growth of bacillus cereus bacteria on the surface of dental implants, without any need for fluorescent staining (see image, below). 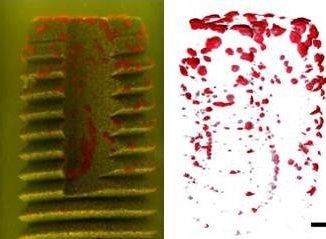 Scientists within LZH’s Biophotonic Imaging and Manipulation Group are currently working with industrial partners LaVision BioTec and Scivis to develop a fully automated tomographic module. Built into an existing confocal and two-photon microscope, LZH says that the unit could be used for a variety of biological applications – for example to monitor the fluctuation of NAD/NADH and calcium ion levels, or to probe artificial tissue.

The development of the SLOT technique and industrial module is financially supported by the German Federal Ministry of Economics and Technology (BMWi) within the Framework of the Central Innovation Program SME (ZIM).