US Navy wants airborne system to protect personnel moving between ship and shore. 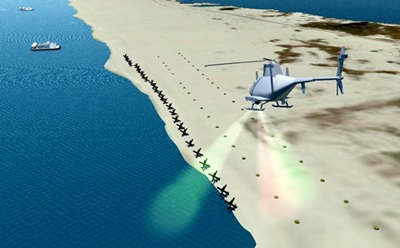 The US Navy has awarded BAE Systems a $20 million contract to develop a prototype light detection and ranging (LIDAR) system to locate mines in near-shore waters.

Part of a wider development known as the Coastal Battlefield Reconnaissance and Analysis (COBRA) program, the airborne system is wanted to provide round-the-clock protection of Navy personnel as they move from ship to shore and back again.

Reid Noguchi, general manager of BAE Systems Spectral Solutions, said in a statement: “Having conducted extensive research and development in advanced sensors, airborne prototype systems, and sophisticated real-time software, BAE Systems has worked closely with the Office of Naval Research (ONR) to mature the technologies and capabilities to meet the Navy’s mine countermeasures needs on an accelerated timeline.”

The technology involved is being developed under Section 819 of the National Defense Authorization Act, which is aimed at the development of advanced components or prototypes. According to Brian Almquist, program officer in the ONR Ocean Battlespace Sensing Department, that law helps to reduce acquisition costs while accelerating delivery of technology to the US Naval fleet.

It will be developed at BAE Systems’ facilities in Honolulu, Hawaii; Greenlawn, New York; Acton, Massachusetts; and Hudson, New Hampshire.