Massive arrays of fiber lasers could be the driving force behind next-generation particle accelerators. Other benefits expected to be in nuclear waste remediation and medicine. 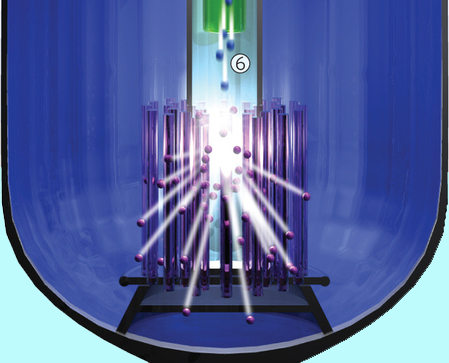 A fiber laser alternative scheme to the Large Hadron Collider?

An international consortium of physicists has proposed a revolutionary laser system, inspired by telecommunications technology, with the aim of producing the next generation of particle accelerators, such as the Large Hadron Collider (LHC).

The International Coherent Amplification Network (ICAN) is presenting the design for a new laser system composed of massive arrays of thousands of fiber lasers, for both fundamental research at laboratories such as CERN and more applied tasks such as proton therapy and nuclear transmutation.

The results of this study have just been published in Nature Photonics.  The article asks, “Could massive arrays of thousands of fiber lasers be the driving force behind next-generation particle accelerators? The International Coherent Amplification Network project believes so and is currently performing a feasibility study.”

Lasers can provide, in a very short time measured in femtoseconds, bursts of energy of great power counted in petawatts or a thousand times the power of all the power plants in the world. Compact accelerators are also of great societal importance for applied tasks in medicine, such as a unique way to democratize proton therapy for cancer treatment, or the environment where it offers the prospect to reduce the lifetime of dangerous nuclear waste by, in some cases, from 100 thousand years to tens of years or even less.

The Nature Photonics paper reports, “In recent experiments, electrons have been accelerated by laser wakefield schemes to gigaelectronvolt energies over distances of just a few centimeters — a length that is orders of magnitude smaller than that required by conventional radiofrequency-based accelerators. These exciting developments suggest that, in principle, laser-based schemes could offer a far more compact, cost-effective approach to making high-energy particle accelerators in the future."

However, there are two major hurdles that prevent the high-intensity laser from becoming a viable and widely used technology in the future. First, a high-intensity laser often only operates at a rate of one laser pulse per second, when for practical applications it would need to operate tens of thousands of times per second. The second is ultra-intense lasers are notorious for being very inefficient, producing output powers that are a fraction of a percent of the input power.

Principle of a coherent amplifier network.

As practical applications would require output powers in the range of tens of kilowatts to megawatts, it is economically not feasible to produce this power with such a poor efficiency.  To bridge this technology divide, the ICAN consortium, an EU-funded project initiated and coordinated by the École polytechnique and composed of the University of Southampton's Optoelectronics Research Centre, Jena and CERN, as well as 12 other prestigious laboratories around the world, aims to harness the efficiency, controllability, and high average power capability of fiber lasers to produce high energy, high repetition rate pulse sources.

The Nature Photonics paper explains, “To generate both high average and peak powers using fibers, peak powers must be increased from present levels of gigawatts to the desired level of tens or hundreds of terawatts. The key technology for achieving this is coherent beam combining, as pursued by the International Coherent Amplification Network (ICAN) and the Coherent Amplification Network (CAN), in which pulses from many fiber lasers are coherently combined on very large scales.”

The aim is to replace the conventional single monolithic rod amplifier that typically equips lasers with a network of fiber amplifiers and telecommunication components. Gérard Mourou of École polytechnique who leads the consortium says, "One important application demonstrated today has been the possibility to accelerate particles to high energy over very short distances measured in centimeters rather than kilometers as it is the case today with conventional technology.”

Dr Bill Brocklesby from the ORC adds: "A typical CAN laser for high-energy physics may use thousands of fibers, each carrying a small amount of laser energy. It offers the advantage of relying on well tested telecommunication elements, such as fiber lasers and other components. 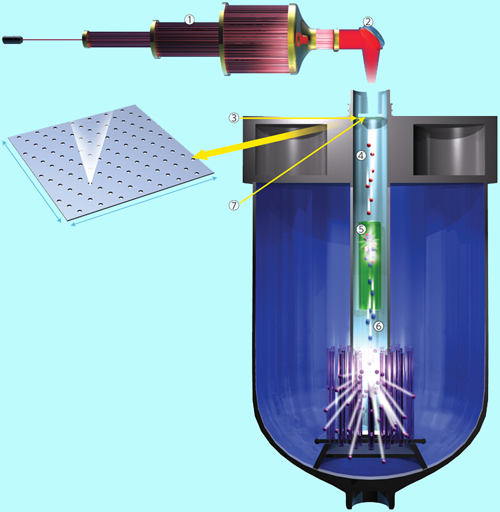 Schematic of an ADR system with fiber front end.

"The most stringent difficulty is to phase the lasers within a fraction of a wavelength. This difficulty seemed insurmountable but a major roadblock has in fact been solved.

Preliminary proof of concept suggests that thousands of fibers can be controlled to provide a laser output powerful enough to accelerate electrons to energies of several GeV at 10 kHz repetition rate - an improvement of at least ten thousand times over today's state of the art lasers."

Such a combined fiber-laser system should provide the necessary power and efficiency that could make economical the production of a large flux of relativistic protons over millimeter lengths as opposed to a few hundred meters.

One important societal application of such a source is to transmute the waste products of nuclear reactors, which at present have half-lives of hundreds of thousands of years, into materials with much shorter lives, on the scale of tens of years. CAN technology could also find important applications in areas of medicine, such as proton therapy, where reliability and robustness of fiber technology could be decisive features.