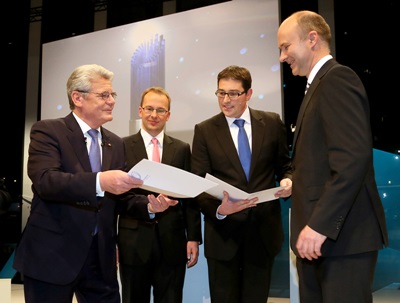 A team that developed ultrafast lasers for industrial applications has won this year’s German Future Prize.

Stefan Nolte from the Friedrich-Schiller University of Jena, Dirk Sutter from Trumpf and Jens König from Bosch were presented with the award by German federal president Joachim Gauck at a ceremony in Berlin on December 4.

The three researchers have been instrumental in turning ultrashort-pulse lasers (defined as shorter than 10 picoseconds) into a new tool for mass production that virtually eliminates any detrimental effects of heating. That is because the laser pulses are so short in duration that they vaporize, rather than melt, the target material.

The approach has now been widely used to drill ultrafine holes into metal – for example improving fuel efficiency in car engines – as well as to cut medical stents from tiny polymer tubes, create shatterproof touch-screens for smartphone displays, structure thin-film solar cells, and even to cut diamonds.

Decisive phase
Peter Leibinger, the president of Trumpf’s laser technology and electronics division, said: "With the ultrashort pulse laser we've opened a door into a new realm – and we won't know its precise size or full details about it for a very long time.”

“That is why micro-processing using lasers like these is a production technology of the future – and German companies are the world leaders here. We regard the award of the German Future Prize as reflecting the industrial and political relevance of our joint innovations, which is why we're very proud to receive it.”

The German laser manufacturer points out that the award comes at a decisive phase in the adoption of ultrashort-pulse lasers. It says that while such sources have long proven their suitability for industry, the technology is now entering new sectors of mass production, replacing conventional approaches such as mechanical drilling, eroding or chemical etching. “Entirely new products that were impossible to make at all until now can now be manufactured using the ultrashort pulse laser,” claims Trumpf.

Prizewinner Sutter, who heads up ultrashort pulse laser research and development at Trumpf’s Schramberg facility, is optimistic that the adoption of the technology will now grow quickly: "I'm assuming that the production figures will continue to rise steeply in the future, since the technology offers great advantages for numerous fields of application," he said. 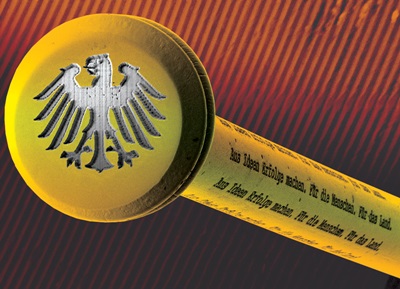 Laser precision: on the head of a pin

Economic impact
According to figures from Bosch, Sutter's assumption is correct. The sales revenue from ultrashort-pulse lasers and the products manufactured with them will exceed one billion euros for the first time in 2014 - but this is set to grow rapidly.

One of the best-known applications of the technology is to drill tiny nozzles in direct fuel injection valves for car engines. Bosch says that this reduces fuel consumption in gasoline engines by up to a remarkable 20 per cent, by allowing the injection nozzles to be adapted to the shape of each different engine design.

“This was not possible in the same way with previous manufacturing processes and tools,” says the German supplier of automotive parts – and much else besides. It adds that no fewer than 14 engine projects, with nine different customers, currently employ laser-drilled injectors. “That equates to approximately two million vehicles. This trend is set to continue.”

Aside from injector nozzles, applications now using ultrashort-pulse lasers include “swirl valves” that are said to reduce the consumption of oil-fired heating boilers by as much as 15 per cent, thin-film solar cells and touch-screens for consumer electronics.

From 2011 to 2012, Bosch says that the number of products it manufactured with ultrashort pulse lasers rose from approximately 4.7 million to 11.6 million units. But a dramatic increase in the use of those laser systems is currently under way at the firm’s facilities in Bamberg in Germany and Bursa in Turkey, with that unit production level predicted to grow to 80 million by the end of the decade.

“By the end of 2013, Bosch will have supplied around 30 million components manufactured using ultrashort pulse laser technology to its customers,” it says. “Bosch currently has several facilities where this technology is in use. Further facilities will be installed by 2020 to handle products that are already being planned or are anticipated. It is expected that these will be producing more than 80 million Bosch products per year by then.”

In the meantime, Trumpf and others are working on the next generation of even shorter pulses: femtosecond lasers.

Bosch "laser tamers" corporate video on the use of ultrashort-pulse lasers: