A new £350 million training program for postgraduates in the UK is set to generate expertise across a wide range of photonics-related research, from graphene applications to additive manufacturing.

The expanded “Centres for Doctoral Training (CDT)” program, which will also promote stronger links with industry, is ultimately expected to train more than 3500 students in engineering and physical sciences over four years.

Some 70 new centers across 24 different universities are being funded with cash from the Engineering and Physical Sciences Research Council (EPSRC). Around a tenth of those centers feature photonics-related research – some more directly than others.

They include a joint CDT hosted by University College London (UCL) and Cambridge University that will see postgraduates in the program work on the optimal integration of photonics in electronic systems.

That builds on what UCL describes as the “enormous success” of an earlier CDT for photonic systems development that has been hosted by the two universities since 2009.

Industry connection
UCL, whose new integrated photonic and electronic systems CDT is expected to train five cohorts of PhDs over the next eight years, will see more than 35 collaborating companies involved in the students’ training environment.

David Willetts, the UK’s science minister, highlighted the importance of that connection with industry, saying:

“I am particularly pleased to see strong partnerships between universities, industry and business among the new [CDTs] announced today. This type of collaboration is a key element of our industrial strategy and will continue to keep us at the forefront of the global science race.”

More evidence of that connectivity came at the launch event for the new CDT program, which was hosted at telecoms giant BT’s landmark tower in central London and saw EPSRC chief executive David Delpy sign a memorandum of understanding with Tim Whitley, the managing director of BT’s research wing.

According to EPSRC, that much closer relationship at the pre-competitive research level is designed to ensure that the work delivers not just academic excellence, but high levels of “economic and societal impact”. Along with the UK-based vacuum cleaner manufacturer Dyson, BT is closely involved in no fewer than seven of the new CDTs. 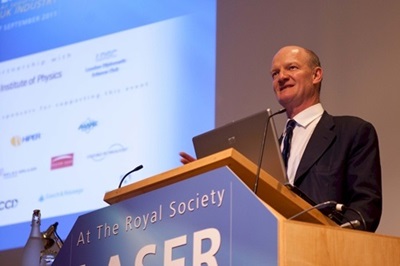 Economic impact
Alwyn Seeds, a professor in UCL’s electronic and electrical engineering department, will head up the new UCL/Cambridge CDT focused on photonic and electronic integration. He said:

“Given the success of our existing Centre in Photonic Systems Development over the last five years, we believe that the time is now right for the new [CDT] to move ahead and address new integrative technologies for future products and systems.”

“Photonics is embedded within a very wide range of systems, ranging from sensing through data centers and communications to displays. In almost every case photonics must be combined with electronics and software to create a working system.”

“The new [CDT] builds on work we have already undertaken to broaden the training of researchers to strengthen their appreciation of the systems context of technology research.

“Our aim will now be to increase pull-through of underpinning work in the physical and material sciences to advance the integration of photonic and electronic systems, leading to step improvements in electronic system performance through the use of photonics technology, radical systems cost reduction and a broadening of the applications field for electronics and photonics."

According to reports, the UK photonics and UK electronics already generate annual revenues of £10 billion and £29 billion respectively – and Seeds believes that the co-operation between academia and business through the CDT will ultimately have a major economic impact.

“Together we will train researchers to create a new generation of products and systems where photonics and electronics are fully and optimally integrated,” he said. “The change in systems that this will enable is as profound as the development of the PC from a simple standalone device to the fully networked information appliance that we have today. The benefits to the UK economy will be correspondingly large.”

From graphene to additive manufacturing
Aside from the UCL/Cambridge CDT, several other photonics-related postgraduate training centers have won EPSRC backing. They include a CDT for applied photonics at Heriot-Watt University in Edinburgh, which will be led by ultrafast optics expert Derryck Reid from the university’s school of engineering and physical sciences.

Cambridge will also host a CDT focused on graphene technology headed up by Andrea Ferrari, while the University of Manchester’s Irina Grigorieva leads another in applications of the one-dimensional carbon material.

Meanwhile Ken Durose will co-ordinate a CDT for “new and sustainable” photovoltaics at the University of Liverpool’s Stephenson Institute for Renewable Energy. His laboratory has developed high-efficiency thin-film solar devices based on layers of cadmium telluride and cadmium sulfide.

Liverpool’s school of engineering will be one of the partners in a CDT focused on additive manufacturing and 3D printing that is being headed up by Chris Tuck from the University of Nottingham. It also includes Newcastle and Loughborough universities.

Metamaterials also gains funding for a CDT at the University of Exeter that will be managed by physics and astronomy professor Roy Sambles. Focused on potential applications in energy harvesting, imaging and the much-hyped ‘cloaking’, PhD students in this CDT will research a wide range of metastructures including graphene, as well as topics like spintronics and plasmonics. Industrial and government laboratory involvement will provide an additional 50% of the EPSRC funding for this CDT.

Sambles said: “To be selected by rigorous peer review to provide a training and research environment to inspire our ablest young people is fantastic. The UK needs to play a lead role in this area and the CDT provides Exeter with a great opportunity to do just that.”

To view the full list of 70 funded CDTs, visit the EPSRC web site.