But executive chairman Jerry Rawls thinks that communications firms will have to begin adding to their network capacities before long. 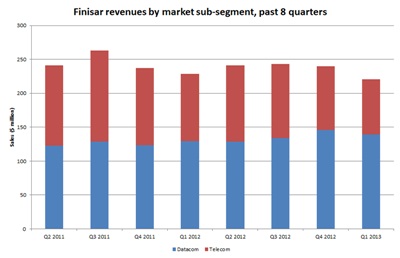 Finisar, the top-ranked supplier of optical components and subsystems for fiber-optic communications, has posted a net loss of $6.2 million for its opening quarter of fiscal 2013, which ended on July 29.

The loss compares with a net profit of $18 million made by the company in the immediately preceding quarter, and reflects a slump in sales revenues to a two-year low (see figure, right), amid weak spending by European telecommunications providers in particular.

Revenues fell to $220.5 million in the latest quarter, down 8% sequentially and putting a squeeze on Finisar’s operating margins. The California company’s non-GAAP results made for better reading, but operating income still dropped by nearly half, with the weak macroeconomic environment held responsible.

“Generally, telecom spending throughout the world has been soft. In addition, we had two fewer shipping days in the first quarter than in the previous quarter," said Jerry Rawls, Finisar’s former CEO and now executive chairman.

Like so many before him, Rawls identified weak spending in Europe and slowing economic growth in China as the chief reasons for the sales slump, although he is expecting a return to growth in the current quarter, and believes that a new period of stronger spending to boost optical network capacities could be just around the corner.

Capacity build?
Speaking to an investor conference call, Rawls recalled that during the global financial crisis some four years ago, spending on fiber-optic networking equipment slowed to a near-halt for nine months, while demand for bandwidth continued to grow quickly.

Telecom and datacom companies addressed that with six consecutive quarters of double-digit increases in spending to plug the gap. More recently, their spending has slipped again – Finisar’s latest figures represent the company’s lowest quarterly sales for two years, with telecom sales down much more than datacom - but all the while bandwidth demand continues to grow inexorably.

“We’ve now had several flat or down quarters,” Rawls said. “But as demand continues to grow the telephone companies of the world are getting close to the policy levels [sic] at which they have to start adding capacity.”

“I think we’ll see a sustained period of spending for some period of time,” he continued, without specifying exactly how long he expected that period to last for.

Rawls’ comments echo concerns raised in the new US National Academies report on the importance of optics and photonics. In the report’s chapter on communications, information processing and data storage, the authors highlight that growth of internet traffic could become constrained in 2013 or 2014 without the adoption of new technologies, citing discussions with key traffic-driving companies including Google and Facebook.

Capacity constrained
“Some fundamentally new optical solutions that build on top of today’s WDM [wavelength-division multiplexed] optical networks will be urgently required in order to ensure that the global internet [sic] is able to continue to serve as the engine for economic growth,” it states, adding:

“It is estimated that without new technology developments, internet growth will be constrained starting between 2013 and 2014.”

With overall spending on optical networks expected to grow in the remainder of 2012, including a return to stronger spending among Chinese carriers, Finisar said that its sales will grow to between $225 million and $240 million in the current quarter – though the relatively wide range reflects a good deal of ongoing uncertainty.

What is certain is that the company, along with its competitors, will be unveiling new products and technologies at the forthcoming ECOC 2012 conference and exhibition, which is taking place in Amsterdam from 16-20 September. The event will also witness the first major public appearance of the merged Oclaro and Opnext companies. The combined entity now ranks among the three leading fiber-optic component and subsystem providers worldwide, along with Finisar and JDSU.