Production capacities will be more than doubled, expansion will enable company to meet "strong growth in demand" particularly from Asia. 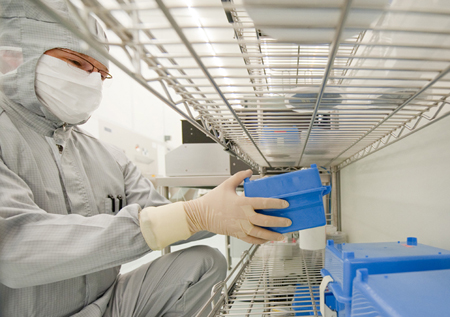 New opening: In Berlin, Jenoptik is doubling its manufacturing capacity of semiconductor lasers.

At the end of August, Jenoptik’s Lasers & Material Processing division opened its new production facility for high-quality semiconductor lasers in Berlin. These form the basis for high-power diode lasers, which are intedned to be used as efficient tools in industrial materials processing and medical technology applications.

The production facility is located in the Berlin-Adlershof Technology Park. The company’s investment of approx. €10 million is the largest to date by the optoelectronics group after the production facility for energy systems at the Altenstadt site (Bavaria) was modernized and expanded in 2011.

At the Berlin-Adlershof site, Jenoptik develops and manufactures semiconductor lasers, so-called laser bars, which are used in Jenoptik’s high-power diode lasers. The company says that this expansion will enable it to meet the strong growth in demand particularly from Asia. Overall, its production capacities will be more than doubled.

“By making this investment we are expanding our position as a global leader in this market segment,” said Jenoptik Chairman Michael Mertin. “In this context we are not only increasing our production capacity but also investing in the latest available technology.”

“Even though we are currently decisively forging ahead with the process of internationalization within the Jenoptik Group, with the focus on America and Asia, Germany is and remains a high-tech production site for our customers throughout the world,” he added. Jenoptik plans to invest a total of approx. €35 million in 2012.

Jenoptik’s modern production facility in Berlin-Adlershof was built between 2005-2006. Since 2005, including the current expansion, Jenoptik has invested more than €25 million in state-of-the-art production facilities. The current expansion has increased the size of the plant from the original 2,000 to 3,400 square meters, with clean room facilities making up almost 1,000 square meters.

The entire process line covering epitaxy, wafer processing and facet coating has been installed in the clean rooms – the new areas have been added on to the existing clean rooms – in order to manufacture semiconductor lasers. Wafers are structured and processed to laser bars, which are supplied to customers worldwide. At Jenoptik’s site in Jena they are processed to make high-power diode lasers and integrated into other laser systems.

Diode lasers are artificial light sources that create maximum electro-optical efficiency. They convert up to 70 percent of the supplied electrical energy into light. As a comparison, the efficiency of a conventional bulb is approx. five percent, that of an energy savings lamp up to 25 percent. In addition, diode lasers are very compact and sturdy, making them easy to integrate into laser systems.

Demand for high-power diode lasers from Jenoptik has risen sharply over recent years as a result of new laser applications and the high quality that Jenoptik delivers to customers worldwide. In the area of industrial laser materials processing, diode lasers are used as a high-efficiency pumping source for solid-state and fiber lasers or increasingly as a direct application (“diode direct”), amongst other things for soldering and hardening of metals as well as for welding plastics. 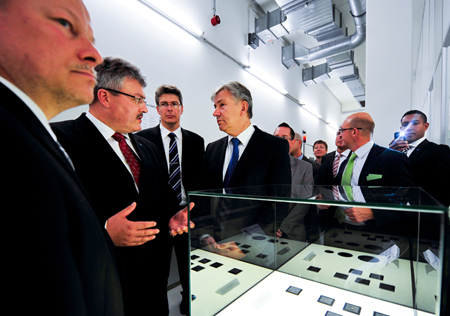 Interview with Jenoptik in Berlin

optics.org: When does the new site commence production of the new lasers?

Jürgen Sebastian: At the beginning of 2013. We purchased some new measurement and test equipment, which will be used also by our R&D team for the further development and improvement of our epitaxy, process technology and facet coating technology and also for the development of new products.

How many staff and at what level are working at the new site?

Our employees for the production and R&D are mainly physicists, process engineers and microtechnologists. We will continue to hire new staff members in order to support our increasing production.

Into which technical and geographical markets will Jenoptik sell these high-power semiconductor lasers?

Material processing, health care and medical technology. Pumping of solid-state lasers as well as diode direct applications. These markets are in the USA and Asia.

Will Jenoptik also be fabricating fiber lasers based on single emitters / diodes – and not based on Jenoptik laser bars?

Dr. Thomas Fehn, head of Jenoptik’s Lasers & Material Processing division: This division is based on the high power laser roadmap, which includes fiber lasers as well as on the diode laser know-how of the division. This includes both laser bars and single emitters in the near infrared.

Will you be buying in the components from external suppliers. Is it the company’s intention to be completely vertically integrated – to make all of your own integrated laser components for the high-power semiconductor lasers and fiber lasers?

T.F.: We are buying in some components and also focusing on using our own material in the products, which are in the main stream of our product roadmap. Our Lasers & Material Processing division is based on the high power laser roadmap, which includes fiber lasers as well as on the diode laser know how of the division. This includes both laser bars and single emitters in the near infrared.

Yes, our intention is to be vertically integrated, and Jenoptik has all the potential to do that. But there will be still components, which will be bought in because of the need to optimize time to market and pricing.

Can you detail the breakdown of the company’s €35 million investment through 2012, besides the new high-power semiconductor lasers plant, giving destination and cost

J.S.: The projected Jenoptik investment and capital expenditure for 2012 will be about €35 million, which was planned and forecast in the Annual Report 2011, mainly in the following segments: defense & civil systems; continued optimization of the production facility at the Altenstadt location (Bavaria) in the areas of mechanics and energy systems. In sum that will be about €8 million.

Considering the Lasers & Optical Systems division, there will be expansion of the production facility in Berlin for semiconductor laser manufacturing, which will require investment of about €10 million, covering modernization of machinery and equipment in general, such as test and measurement equipment for clean rooms, for 3D laser materials processing, and for expansion of logistics areas and production sites, amongst others for orders from the semiconductor industry, health care and the defense and security industry.