Anti-dumping duties could be imposed on Chinese solar imports to Europe by the middle of next year. 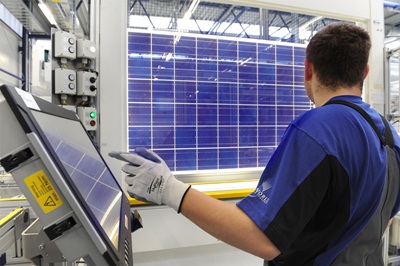 The European Commission (EC) has launched an anti-dumping investigation into imports of solar panels, cells and wafers from China, and could begin imposing provisional tariffs on the products by June 2013.

The widely expected move follows a similar case brought in the US, although is potentially much more serious for Chinese solar companies, given the much larger size of the European market for PV historically.

Specifically, the EC’s investigation is in response to a complaint lodged by the “EU ProSun” consortium of European PV companies in late July, which alleges that imports of panels, cells and wafers from China enter the European market at prices below their true value.

In that complaint, EU ProSun – said to represent more than 20 European companies that between them account for more than half of all production in the continent – had warned:

“This strategic industry for Europe’s future is being decimated by unfair competition from China. Unless the European Union takes action, there will no longer be any manufacturing or R&D solar jobs left in Europe.”

Milan Nitzschke, the EU ProSun president, is also head of marketing and communications at the German PV firm SolarWorld – the same company that spearheaded the anti-dumping and countervailing complaints in the US that recently resulted in tariffs being imposed on Chinese imports. 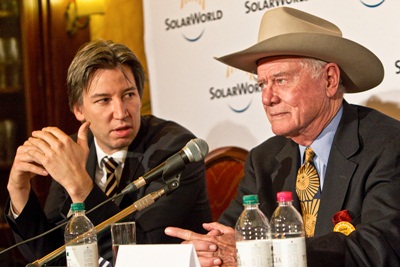 “Chinese companies are selling solar products in Europe far below their cost of production, with a dumping margin of 60% to 80%,” he claimed. “This means that Chinese solar companies are making enormous losses, but are not bankrupt because they are bankrolled by the state.”

“Such practices have led to over 20 major European solar manufacturers going out of business already in 2012 alone. If China destroys the EU solar industry, where labor accounts for less than 10% of production costs, then virtually all European manufacturing sectors and jobs are under threat.”

According to the EC’s figures, China currently accounts for around 65% of all solar panels produced globally – a figure that has increased dramatically in recent years after the Chinese government identified PV as a strategic industry and plowed huge sums of money into developing a volume manufacturing infrastructure.

The EC adds that Europe has traditionally been China’s main export market for PV products, accounting for some 80% of export sales. As recently as 2004, that figure was zero, and is a result of the generous financial incentives that have been on offer in Germany and Italy, combined with the crash in PV prices caused by China’s oversupply to the market.

But with incentives in Europe being cut, the second half of this year is expected to witness a sea-change in the dynamics of global PV demand. China has stepped up its own internal targets for installation of PV in the country, while Japan has adopted an attractive feed-in tariff mechanism in a bid to diversify the country’s energy supply and move away from a historic dependence on nuclear power.

China reacts to "misleading" and "protectionist" claims
Unsurprisingly, reaction to the EC investigation in China has been negative. The country’s Ministry of Commerce spokesman Shen Danyang responded immediately, saying that China has repeatedly called for consultation and cooperation to resolve trade friction in photovoltaics, rather than resort to punitive measures.

Shen added that the move and any subsequent import duties applied would not only hurt the interests of both sides of the industry, but would also destroy the healthy development of the global PV industry and deployment of clean energy.

Yingli Green Energy, which will potentially become the world’s leading supplier of PV modules this year, also vented its frustration. Though saying that it would cooperate with the EC investigation, it described the claims from EU ProSun as “misleading” and “protectionist”.

“The solar industry is based on a global and complex value chain, and will be therefore substantially and negatively affected by trade protectionism," said Darren Thompson, managing director at Yingli Green Energy Europe.

“There would be no winners but rather immeasurable damage and regression from our fundamental goal of making solar a cost-effective energy source available to everyone. In addition, such actions would significantly delay the onset of a sustainable solar electricity market free of government support.”

Suntech, ranked as the largest PV supplier in 2011, added: "Protectionist measures would increase the cost of solar energy in Europe, and adversely affect European jobs in the solar industry. We stand together with the majority of European and global companies in the solar industry in supporting free trade."

“Preventing a monopoly”
Nitzschke and EU ProSun dismiss that notion, arguing that PV costs and prices will continue to decline steadily as technology continues to develop. “Demand for solar systems and local installation jobs will not decrease if anti-dumping measures are imposed on unfairly traded imports from China,” they claimed in a statement issued following the EC announcement, adding:

“Trade measures would only restore fair competition with China, and prevent a monopoly over solar manufacturing that would be bad for European consumers, jobs, installers and industry.”

The EC will begin its investigations immediately, firstly through a series of questionnaires to the various parties involved. For duties to be imposed, the investigation must show conclusively that dumping has occurred; that EU industry has suffered “material injury”; that there is a causal link between the dumping and that injury; and that any imposition of tariffs would not harm EU interests overall.

If prima facie evidence of that is found, provisional duties could be imposed by June 2013, though the full investigation will take 15 months. At that point, the EC will either terminate the case without measures, or impose definitive anti-dumping duties for a period of five years.