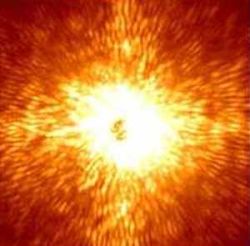 Seeing the light: Project 1640 in action

A system now commissioned at Palomar Observatory after six years of development is said to be the first of its kind, capable of imaging exoplanets orbiting stars outside of Earth's solar system.

Direct imaging of exoplanets requires, at a minimum, a high-order adaptive optics (AO) system to correct the aberrations in the incoming stellar wave front caused by the Earth’s atmosphere; and a coronagraph, a telescope attachment which blocks light from the center of the telescope beam while permitting light from surrounding sources to pass through relatively undisturbed.

However, coronagraphy and AO can still leave residual noise in the image, particularly a pattern of speckles arising from small-phase aberrations in the incoming stellar wave front. This noise pattern is an optical phenomenon and its morphology is wavelength dependent, a causal connection that allows differentiation between the speckle noise and true astrophysical objects through spectroscopic analysis.

Project 1640 incorporates all of these principles: its design employs an integral field spectrograph coupled to a coronagraph and a precision wave-front calibration system, all integrated to Hale's high-order AO system. The overall technique can darken the speckles far beyond any previous capability, in effect carving a dark square in the speckle background centered on the star.

"High-contrast imaging requires each subsystem to perform flawlessly and in complete unison, to differentiate planet light from starlight," said Caltech's Richard Dekany. "Even a small starlight leak in the system can inundate our photodetectors and pull the shroud back down over these planets."

The high-contrast imaging capabilities of Project 1640 are likely to remain unmatched in the northern hemisphere for some time, according to its developers. Now that the full system is working, researchers have started a three-year survey, during which they plan to image hundreds of young stars searching for faint low-mass companions and Jovian-mass planets.

Woofers and tweeters
For its AO, Project 1640 employs Hale's PALM-3000 system, thought to be the most advanced such instrument in the world. PALM-3000 is designed to deliver extreme AO correction, using both natural and sodium-laser guide stars.

Its wavefront control comes courtesy of two deformable mirrors: a low-bandwidth, large-actuator-stroke mirror with 3368 active actuators (or "woofer"); and a high-bandwidth, low-actuator-stroke "tweeter" mirror controlled by 349 active actuators. The pair are controlled using a wavefront processor based on a cluster of 17 graphics processing units.

Its developers have described PALM-3000 as "the first extreme AO system deployed for astronomy." The system is a successor to the previous AO installation at Hale, known simply as PALMAO, which consisted only of the "tweeter" mirror now incorporated into the far more advanced current instrument.

Project 1640 will capitalize on the low wavefront-error delivered by the PALM-3000 instrument, and other instruments due to be deployed at Palomar in the future will do the same. These potentially include operation of both integral-field spectroscopy and diffraction-limited imaging of visible light, which could open a new wavelength realm for AO-corrected scientific observation and yield sensitivity rivaling that of the Hubble Space Telescope.

• Some of the first images generated by the new setup were presented earlier this month at the International Society for Optics and Photonics (SPIE) Astronomical Telescopes and Instrumentation meeting in Amsterdam by Ben Oppenheimer, a curator in the American Museum of Natural History's Department of Astrophysics - and principal investigator for Project 1640.