Approval from the MHRA allows testing of the technique as a means to detect breast cancer tissue. 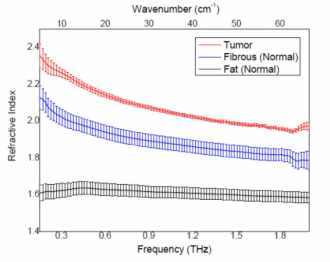 The application of terahertz (THz) spectroscopy to the in vivo detection of cancerous tissues during breast cancer surgery will be assessed at Guy's Hospital, London, when clinical trials begin later in 2012.

The program, now approved by the UK's Medicines and Healthcare products Regulatory Agency (MHRA), will employ a system developed by UK-based THz specialists TeraView as an intra-operative probe during the surgery. The aim is to assist surgeons in better identifying and more effectively removing cancer tissues in the breast.

"This is the first such in vivo test to be carried out, as far as we are aware," commented Ian Grundy of TeraView to optics.org. "The surgeon will use a hand-held probe to examine the margins of the breast tissues, to check that they are cancer-free and that no cancerous tissue remains inside the incision. Our system gives real-time analysis in the theater, so the surgeon can take the necessary action."

This contrasts with the current need for separate laboratory histology tests to assess the effectiveness of cancer removal after the fact, a process which takes considerably longer and often results in patients having to then be recalled for a second surgical procedure.

A recent British Medical Journal study stated that one in five women who had breast-conserving surgery found themselves in this position and obliged to undergo further procedures, while previous coverage on Optics.org put the figure substantially higher. Grundy puts the proportion at around 30 percent; but whatever the exact number, the need for improvement is clear.

"The intention is to use THz technology to provide better clinical outcomes, reduce the stress on patients, lower the number of re-operations, and also cut costs," said Grundy.

Spectral analysis
TeraView has been developing THz technology since the company was spun-out from Toshiba Research Europe in 2001, and has already demonstrated the use of THz imaging techniques for viewing skin carcinomas. Generating quasi-3D images from reflected THz pulses can reveal the exact extent of diseased tissue more accurately than visual observation.

The mechanism by which unhealthy tissue exhibits higher contrast than its surroundings is not fully understood, but is thought to involve the absorption of THz radiation by water in the tissues, and the different hydration states of cancerous and healthy tissues.

The breast cancer study exploits this characteristic by using a THz spectrometer in an absorption mode to measure the THz refractive index and absorption coefficient spectra of the sampled tissues. For both parameters, cancerous tissue reveals a distinctly higher value than either healthy adipose tissue or healthy fibrous breast tissue.

"We can correlate this effect with the presence of cancer tissues completely, and have studied it for many years," commented Grundy. "The barriers to implementing trials to explore it further have to date been to do with making the technology sufficiently robust, and with the necessary funding."

TeraView confirmed that the MHRA-approved trial has received support from the UK's Technology Strategy Board.

Historically the main uses for THz equipment have been within universities and large research institutions, but signs of diversification have been growing. The TeraView trials are proof of that, along with the company's indication that it now has strong interest from solar, automotive, pharmaceutical and semiconductor companies in its technology.