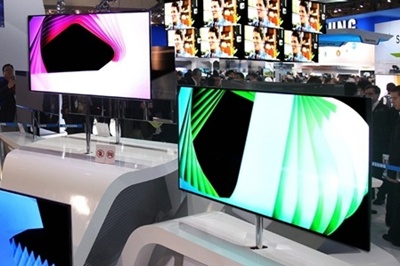 3M’s optical systems business division is to collaborate with the venture-backed company Nanosys on a new quantum-dot technology that promises to help conventional liquid crystal displays (LCDs) hold off the challenge of organic LEDs (OLEDs).

OLED televisions will be launched this year by LG Display and, in all likelihood, Samsung, while other TV companies such as Panasonic and Sony are expected to follow suit. One of the big selling points of the technology is its more vibrant representation of colors, thanks to the fact that OLEDs are direct emitters of colored light – whereas LCDs are effectively filters of white light.

In an announcement timed to coincide with the Society for Information Display (SID) 2012 “Display Week” meeting – traditionally the event where new display technologies are first reported – Nanosys and 3M said that they intend to commercialize what is known as “quantum dot enhancement film” (QDEF) technology.

“QDEF is a drop-in film that LCD manufacturers can integrate with existing production processes,” say the two companies, meaning that the technology is directly compatible with existing LCD production – where 3M’s optical films already play a major role. “It utilizes the light-emitting properties of quantum dots to create an ideal backlight for LCDs.”

Rather than actively creating light, the quantum dot films developed by Nanosys effectively work like a phosphor. When exposed to blue emission provided by a phosphor-less gallium nitride LED backlight, the dots produce narrow-linewidth red and green light, which can be combined with the original blue emission to generate a high-quality white backlight.

Atomic behaviour
Because they are so tiny, quantum dots behave in a similar manner to individual atoms, rather than bulk solids. And the precise color of the light that they produce when illuminated by blue LEDs is determined purely by their size. So by tightly controlling the size of the dots, they can be “tuned” to produce either red or green light at a precise and narrow range of wavelengths.

In an LCD display, what that translates to is a white backlight with a much wider color “gamut”, meaning a much more life-like representation of images on the screen is possible. “Current LCDs are limited to displaying 35 percent or less of the visible color spectrum,” the companies say. “This means the viewing experience on an LCD is vastly different than what a person sees in the real world.”

By increasing that color range by a claimed 50 percent, the QDEF technology offers a challenge to one of the key selling points associated with OLED displays – the vivid color reproduction that results from using direct light emitters in the pixels of the display.

Jason Hartlove, the CEO of Nanosys, said: “We are working together to improve an area of display performance that has been largely neglected for the last decade. Improving color performance for LCDs with drop-in solutions will bring a stunning new visual experience to the consumer and a competitive advantage to the LCD manufacturer against new display technologies such as OLED.”

SID “Gold” award for QDEF
LED-backlit TVs and monitors are now commonplace, but one of the original commercial claims for using the technology was identical to that now being heralded by 3M and Nanosys – that it would improve color gamut dramatically, compared with the white fluorescent backlights that initially dominated in LCD TVs.

As things turned out, it was not color gamut but the ability to make TVs much slimmer and lighter that propelled LED backlights into the mainstream, largely thanks to the intervention of Samsung.

And as the world’s leading producer of active-matrix OLED screens – largely for its own mobile phone and tablet offerings – Samsung has a foot in both camps when it comes to improving color representation in the next generation of TV technologies.

The QDEF technology was also recognized at SID’s annual Display Industry Awards ceremony earlier this week, winning the SID Gold Award in the category of “display component of the year” at the Boston conference and show.

According to 3M, the quantum-dot film being commercialized by the two firms will simply replace a similar film already found inside LCD backlights, and for display manufacturers would require no new equipment or process changes.