Researchers at Spain’s Jaume I University develop semiconductor ‘leaf’ that needs only sunlight to release hydrogen from water. 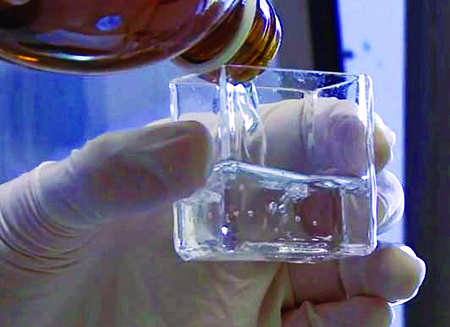 A novel “leaf-like” semiconductor device that produces hydrogen gas from water just by the action of sunlight has been developed by scientists from the Photovoltaic & Optoelectronic Devices group at Universitat Jaume I (“UJI”), Castellón de la Plana, Spain. The group led by Professor Juan Bisquert, has developed the artificial leaf using nanotechnology techniques.

This technology, which the researchers call “artificial photosynthesis”, was inspired by natural photosynthesis, in which plants use sunlight to release the chemical energy stored in the bonds of the molecule adenosine triphosphate (ATP), converting organic material into various compounds, such as sugars or carbohydrates and releasing oxygen gas.

"Although the energy efficiency of the device is currently not sufficient enough for us to consider marketing it, we are exploring various ways to improve its efficiency and to show that this technology represents a real alternative to meet the energy demands of the 21st century.”

Hydrogen is an extremely abundant element on the Earth’s surface, but mainly in strongly-bonded combination with oxygen as water, H2O. The diatomic hydrogen molecule H2 contains a great deal of energy that can be released when burned due to the reaction with atmospheric oxygen, creating environmentally-friendly water as the result of this combustion process.

Giménez adds that in order to convert water into H2 “fuel”, the H2O must be broken down into its constituents. For this process can be carried out in a renewable way (without using fossil fuels), it is necessary to use a device which relies on solar power – with no other assistance – to provoke the chemical reactions to break the water and form hydrogen in a way similar to plant leaves in nature. “That is why we have called these devices artificial leaves.” 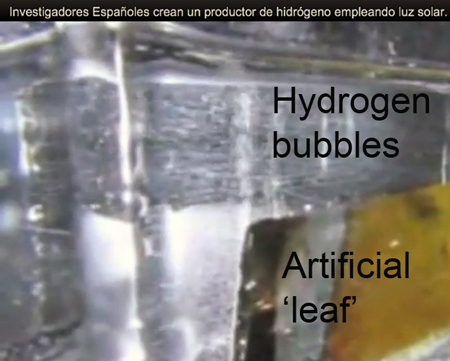 The semiconductor device is submerged in an aqueous solution, which, when illuminated with a light source, forms hydrogen gas bubbles. Initially, the research group used a solution with an oxidizing agent and studied the evolution of hydrogen produced by photons.

“Now the biggest challenge”, comments Iván Mora, a member of the team working on the project, “is to understand the physical-chemical process which is produced by the semiconductor material and its interface with the aqueous medium in order to streamline our device process.”


The team says that the development of the artificial leaf has been a “great scientific challenge” due to the difficulty choosing materials for the process that would working continuously and not decompose.

Currently, the UJI Photovoltaic & Optoelectronic Devices team is one of the few research groups working at an international level that has shown the viability of a device with these characteristics, along with North American laboratories from MIT, Boston, and NREL, Denver.

Research group leader, Juan Bisquert, adds, “in comparison to other devices, that which has been developed by the UJI has the advantage of low production costs and a large collection of incident photons of light, used in the production of hydrogen photons in the infrared spectrum”.