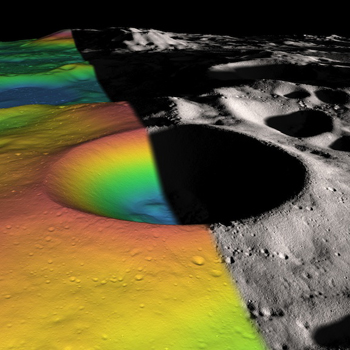 NASA's Lunar Reconnaissance Orbiter (LRO) spacecraft has returned data that indicate ice may make up as much as 22 percent of the surface material in a crater located on the moon's south pole.

The team of NASA and university scientists, using data generated by LRO's laser altimeter, examined the floor of Shackleton crater. They found the crater's floor is brighter than those of other nearby craters, which is consistent with the presence of small amounts of ice. The information should help researchers understand crater formation and study other uncharted areas of the moon. The findings have just been published in Nature.

"The brightness measurements have been puzzling us since two summers ago," said Gregory Neumann of NASA's Goddard Space Flight Center in Greenbelt, Md., a co-author on the paper. "While the distribution of brightness was not exactly what we had expected, practically every measurement related to ice and other volatile compounds on the moon is surprising, given the cosmically cold temperatures inside its polar craters."

The spacecraft mapped Shackleton crater with unprecedented detail, using a laser to illuminate the crater's interior and measure its albedo or natural reflectance. The laser light measures to a depth comparable to its wavelength, or about a micron. That represents a millionth of a meter, or less than one ten-thousandth of an inch. The team also used the instrument to map the relief of the crater's terrain based on the time it took for laser light to bounce back from the moon's surface. The longer it took, the lower the terrain's elevation.

This visualization, created using Lunar Reconnaissance Orbiter laser altimeter data, offers a view of Shackleton Crater located in the south pole of the moon. Thanks to these measurements, we now have our best-yet maps of the crater's permanently-shadowed interior! Note: This video contains no audio. Credit: NASA/Goddard/Ernie Wright

In addition to the possible evidence of ice, the group's map of Shackleton revealed a remarkably preserved crater that has remained relatively unscathed since its formation more than three billion years ago. The crater's floor is itself pocked with several small craters, which may have formed as part of the collision that created Shackleton. 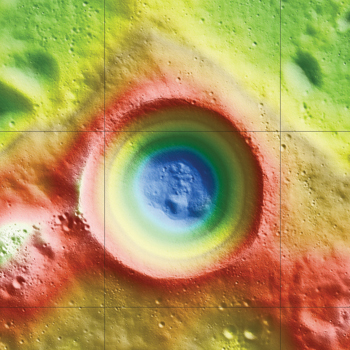 The crater, named after the Antarctic explorer Ernest Shackleton, is two miles deep and more than 12 miles wide. Like several craters at the moon's south pole, the small tilt of the lunar spin axis means Shackleton crater's interior is permanently dark and therefore extremely cold.

"The crater's interior is extremely rugged," said Maria Zuber, the team's lead investigator from the Massachusetts Institute of Technology in Cambridge in Mass. "It would not be easy to crawl around in there."

While the crater's floor was relatively bright, Zuber and her colleagues observed that its walls were even brighter. The finding was at first puzzling. Scientists had thought that if ice were anywhere in a crater, it would be on the floor, where no direct sunlight penetrates. The upper walls of Shackleton crater are occasionally illuminated, which could evaporate any ice that accumulates.

A theory offered by the team to explain the puzzle is that "moonquakes"-- seismic shaking brought on by meteorite impacts or gravitational tides from Earth -- may have caused Shackleton's walls to slough off older, darker soil, revealing newer, brighter soil underneath. Zuber's team's ultra-high-resolution map provides strong evidence for ice on both the crater's floor and walls.

"There may be multiple explanations for the observed brightness throughout the crater," said Zuber. "For example, newer material may be exposed along its walls, while ice may be mixed in with its floor."

The initial primary objective of LRO was to conduct investigations that prepare for future lunar exploration. Launched in June 2009, LRO completed its primary exploration mission and is now in its primary science mission. LRO was built and is managed by Goddard. This research was supported by NASA's Human Exploration and Operations Mission Directorate and Science Mission Directorate at the agency's headquarters in Washington.

This video (above), made using LRO data, shows the illumination of Shackleton crater, a 21 km-diameter structure situated adjacent to the Moon's south pole. The resolution is 30m per pixel. Frames are every hour from 01 to 30 June 2012. Note: this video contains no audio. Credit: NASA/Zuber, M.T. et al., Nature, 2012.